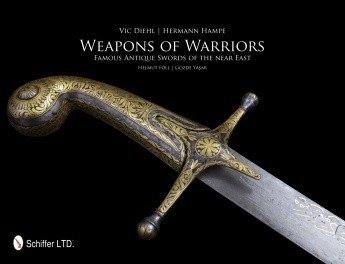 FAMOUS ANTIQUE SWORDS OF THE NEAR EAST

Weapons of Warriors is a photographic study containing many of the most renowned, prestigious, and historical Arabic and Turkish swords from the 12th through the 19th century. Every sword is professionally studio photographed in the highest resolution and corrected color. Each weapon is presented in multiple angles, many in life size across two pages to provide the reader with the most detailed appreciation of the skill, craftsmanship, and artistry involved in the hand crafting of these famous Shamshirs, Kilics, Nimchas, Yatagans, and Saifs. The Askeri Military Museum of Istanbul, Turkey, has set a new standard in international art and cultural exchange by opening its entire collection to the authors. The museum staff provided every assistance to be certain that their most magnificent and important weapons were photographed for this study. The museum director of edged weapons even took the time to pen an essay (included herein) on the Turkish Yatagan. Working with the authors is an international team of writers from Germany, India, and Egypt who provided additional information on the science behind these historically significant blades, traditional “koftgari” decoration, as well as the translation of ancient passages that adorn the edged weapons in this study. This beautiful book is produced for everyone who loves the lore and lure of edged weapons, whether they are beginning students, historians, collectors, or connoisseurs of these most artistic and deadly weapons of warriors.