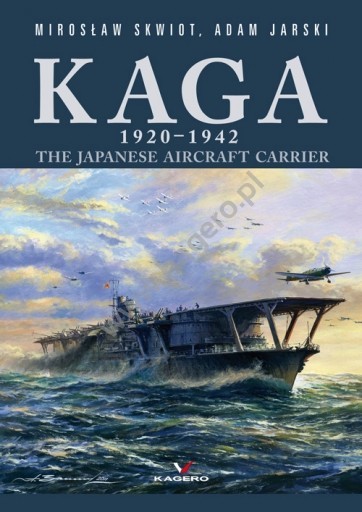 The career of Kaga, which started on the drawing boards of the design bureau as a battleship had capacity for swift development. The first studies on the preliminary design began in 1917 and during the calendar year several variants were developed. Individual solutions envisaged in the design were duly analyzed, and pieces of information systematically arriving from Europe, where the world war was raging, proved helpful in their verification. They had substantial contribution in development of the final design, which was completed in mid 1918 and its author was the designer Captain Yozuru Hiraga. Kaga was laid down on 19 July 1920 in the Kawasaki shipyard in Kobe and the complete hull was launched on 17 November 1921 and the construction was cancelled a month later! The future of the ship was definitely endangered by the Washington Naval Treaty, which notabene stipulated the conversion of Kaga to a target ship. Another chance emerged after the earthquake which affected the Kanto region on 1 September 1923 and heavily damaged the hull of the battlecruiser Amagi. The repair was deemed pointless so it was decided to convert the battleship Kaga, work on which was on similar stage of advance, to a carrier in lieu of the destroyed Amagi. Completed as a carrier she participated in all major Japanese combat operations conducted during 1930 – 1942. Heavily damaged during the Battle of Midway it was sunk by the destroyer Hagikaze.

Her fascinating story was described in four chapters, covering the development of the design of the battleship, conversion to a carrier and the second reconstruction, technical description and operational history. All this is contained on 147 pages of this publication with layout rich in iconographic drawing (designs of uncompleted battleship, design development of the carrier, the first and second reconstruction, armament) and photographic material (more than 180 photographs), depicting major events of the ship’s operational history. At the end selected fragments of 3D visualizations of the carrier Kaga are enclosed, the separate publication on which is also available in our publishing company.