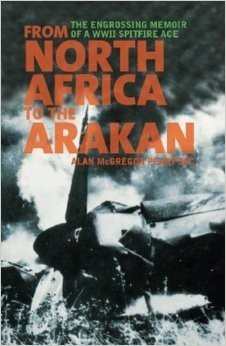 FROM NORTH AFRICA TO THE ARAKAN

The engrossing memoir of a WWII Spitfire ace

Alan Peart was born in Nelson, New Zealand in 1922. Joining 610 Squadron on completion of training, he served against the Germans over occupied Europe, then Tunisia, Malta, Sicily, Italy, and the Japanese over Burma. Operating from 'Broadway' airstrip, his was the only spitfire not destroyed during airstrikes. This is an excellent first hand account of the air war in such varied theatres. The author writes of the appalling living conditions and the issues the aircrew faced living far from civilisation. Further, his descriptions of combat experiences are extremely vivid and dramatic. Especially so when on one occasion during one Japanese raid in Burma, only Alan and his CO were scrambled to intercept. The CO was quickly shot down and Alan found himself in an air battle with 50+ enemy aircraft. He survived to become an ace and tell his remarkable story. He now lives in Hamilton, NZ.