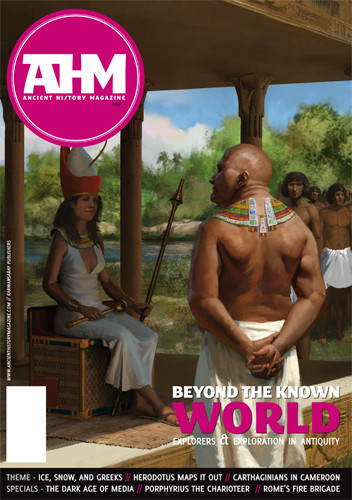 BEYOND THE KNOWN WORLD, Explorers and exploration in antiquity

Theme: Jona Lendering, "All lands covered by the sun - Exploring the World" One of the greatest advances of the twentieth century is more widespread education, which has allowed everyone to have some sort of concept of what the world looks like. People may not all be able to locate this country or that city, but they recognize the outlines. In Antiquity, even the number of continents was unknown. Still, advances were made. Brave voyagers explored the oceans and deserts.

Theme: Joseph Hall, "Voyage to the Frozen North - Pytheas of Mass alia" On the shore of southern Gaul, protected from Gallic tribes of the hinterland by a rocky arc of mountains, rests the city of Massalia. From this idyllic coastal enclave Massaliotes had ventured upon the seas since the founding of the city itself. In the fourth century BC however, one citizen, Pytheas, set out upon a grueling and dangerous voyage. His intentions: to explore the frozen north, to find the Tin Isles, and to discover just what lay within the icy fog beyond the edge of the known world.

Theme: Owen Rees, "The world view of Herodotus - Mapping it out" Although Herodotus is known as “Father of History”, the scope of his work is wider than the past only. The Histories also contain digressions on subjects as varied as ethnography, religion, and geography.

Theme: Judith Weingarten, "Queen Hatshepsut’s expedition south - Journeying to the land of Punt" The ancient Egyptians used myrrh to embalm the bodies of their rulers. Demand was insatiable and it comes as no surprise that Hatshepsut, Egypt’s famous female king, sent out an expedition to the land fr om which it originated.

Theme: Sidney E. Dean, "Romans Seek the Nile's Headwaters - How Low Did They Go?" Rome never attempted to settle or conquer Africa south of the Sahara, but did conduct exploratory missions in that direction. The most famous single expedition was ordered by Nero and conducted in AD 61-62. According to one controversial theory, that expedition might have reached as far south as Lake Albert, near the actual headwaters of the Nile at Lake Victoria.

Theme: Murray Dahm, "The Circumnavigation of Africa and more - Hanno’s Periplus" Homer’s Odyssey may be the quintessential text about travel to unexplored, strange countries, but it certainly isn’t the only one. The Periplus of the Carthaginian sailor Hanno is another example: gorillas, savage men, wild animals, and volcanic eruptions, this short text has them all.

Theme: Jona Lendering, "Exploring the Incense Route - All the perfumes of Arabia" Shakespeare knew his classics. When Lady Macbeth mentions “all the perfumes of Arabia”, she is referring to an age-old belief that the Arabian Peninsula was a place full of sweet smells. One of these was frankincense, which was transported from modern Oman to Gaza and Alexandria, and from there to the entire Roman world, where it was ostentatiously burnt in public ceremonies.

Special: Daan Nijssen, "Iran on the eve of Cyrus’s conquests - The Median Dark Age" The swift rise of the Achaemenid Empire is one of the most intriguing phenomena in Antiquity. Within decades, this new world power united most of the known world into one empire. Unfortunately, the prehistory of this empire is still poorly understood. Classical Greek sources state that the Persian Empire was preceded by a Median Empire, but no hard evidence for such an empire has yet been found. The “Median period” may thus well be called the “Median Dark Age”. This article offers a reconstruction of this Median Dark Age and reassesses the role of the Medes in the prehistory of the Achaemenid Empire.

Special: Lucas Petit, "A much contested near eastern object - Authentic or fake?" It is the nightmare of every collector: the object you bought turns out to be a forgery. Small surprise, therefore, that establishing the authenticity of ancient artifacts has become an important field of research. Occasionally, there is good news.

Special: Mark McCaffery, "The Vigiles of Augustan Rome - Protecting the Neighborhoods" In the year AD 6, Augustus established the corps of vigiles in Rome. Officially tasked with both the prevention and fighting of fires, they also established closer links between the plebs urbana and the princeps. Later, they would also assume policing duties and have a significant role to play in key moments throughout Roman history.

Special: Richard Kroes, "An archaeologist reads a gospel - Smashing bottles" It’s perhaps not the most famous story from the Bible, but it’s still quite significant: how a woman came to Jesus, broke an alabaster jar with perfume, and anointed the Messiah. The problem is that to break an alabaster jar, you need a sledge hammer. That begs the question: just what is going on in this story?

Special: Nicola Bergamo, "Byzantium’s most famous charioteer - Porphyrius the Charioteer" Porphyrius was without question the most important charioteer of the Byzantine era. He reigned supreme on the track for both the Greens and the Blues, so the two factions dedicated seven statues to him, all of which were installed on the middle barrier of Constantinople’s hippodrome. This is his story.

Special: Christian Koepfer, "Bringing wine to the frontiers - The tombstone of Publius Tenatius" On 24 February 1981, the operator of a digger, working on a new boardwalk in Passau (Bavaria), was astonished when he pulled out of the Inn River a huge block of marble with an inscription and relief decoration. The find was made only two hundred meters west of the point where the Danube and Inn Rivers meet. Examination of the block revealed it to be the tombstone of one Publius Tenatius Essimnus.

On the cover: Arianna Sacco, "An Egyptian Queen of the Nile - An audience with HatShepsut" The cover illustration of this first issue of Ancient History Magazine is inspired by a relief from Hatshepsut’s mortuary temple at Deir el- Bahri. The Queen gives a speech to the crowd, including the officers that led an expedition to Punt. In the relief, Hatshepsut is actually portrayed as a man, but for the cover it was decided to go beyond Egyptian iconographic conventions and represent her as a woman.

How do they know?: Jona Lendering, "How do we know if - A papyrus is genuine?" Often, we read about spectacular, recently discovered papyri. Two years ago, there was a fragment in which Jesus was presented as speaking to “my wife”. Not much later, there were fragments by Sappho. Next, we learned about an incredibly old fragment from the Gospel of Mark. But how do scholars know those texts are genuine? 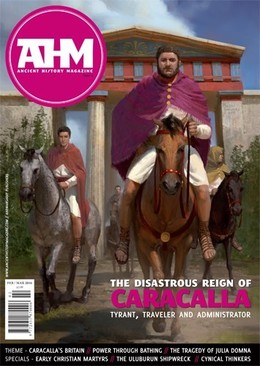 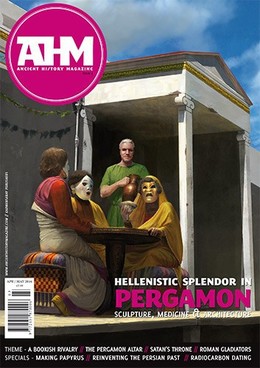 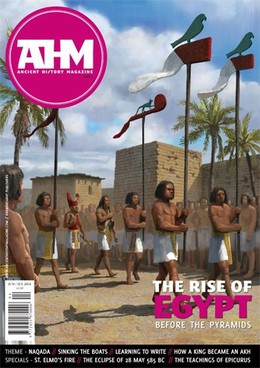 ANCIENT HISTORY MAGAZINE N.4
THE RISE OF EGYPT - BEFORE THE PYRAMIDS 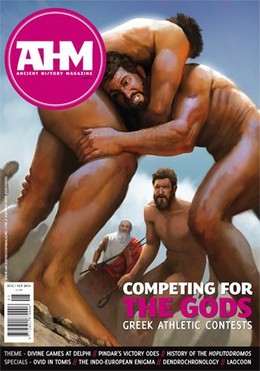 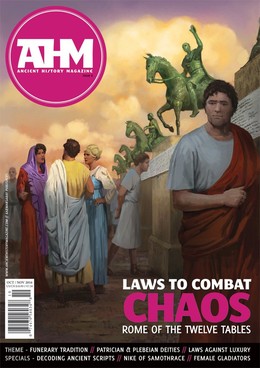 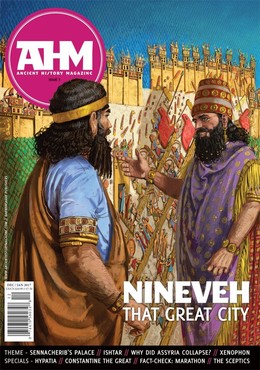 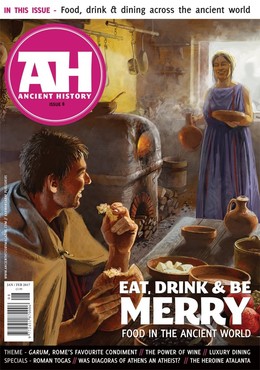 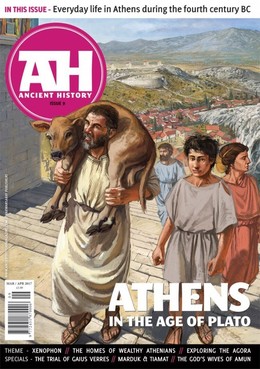 ANCIENT HISTORY MAGAZINE N.9
ATHENS IN THE AGE OF PLATO 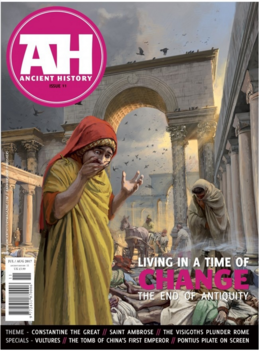 ANCIENT HISTORY MAGAZINE N.11
LIVING IN A TIME OF CHANGE, THE END OF ANTIQUITY 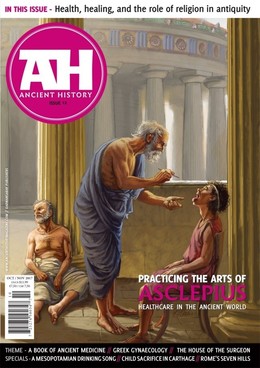 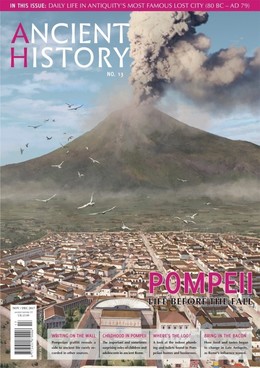 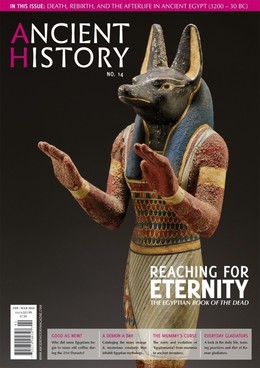 ANCIENT HISTORY MAGAZINE N.14
REACHING FOR ETERNITY, THE EGYPTIAN BOOK OF THE DEAD 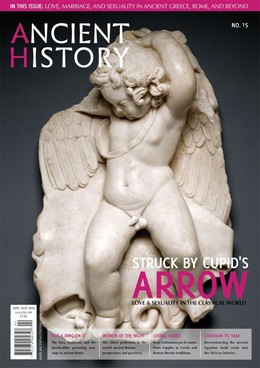 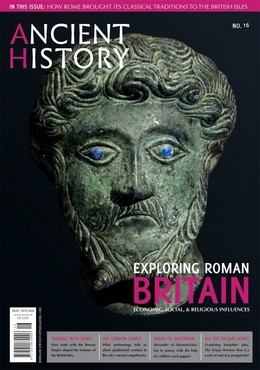 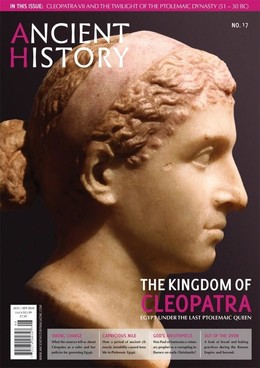 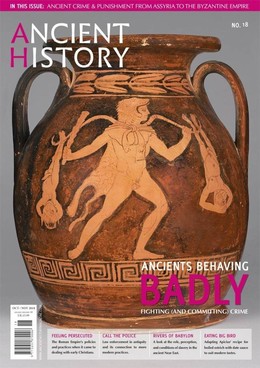 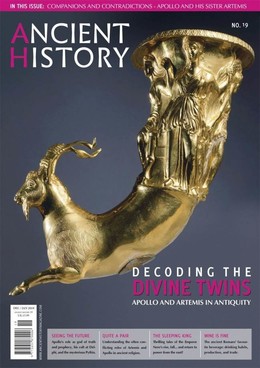 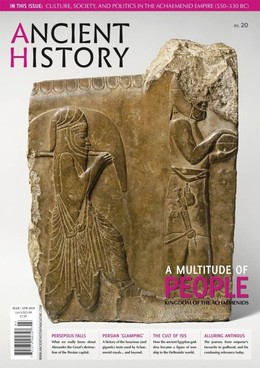 ANCIENT HISTORY MAGAZINE N.20
A MULTITUDE OF PEOPLE, KINGDOM OF THE ACHAEMENIDS 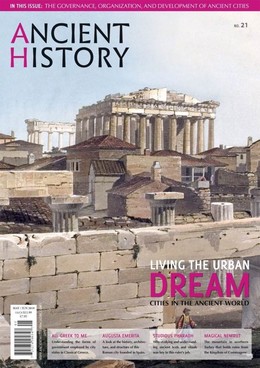 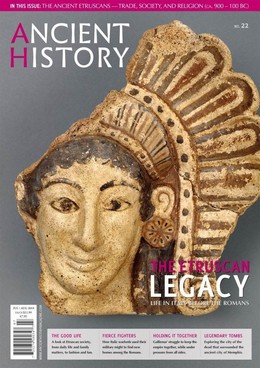 ANCIENT HISTORY MAGAZINE N.22
THE ETRUSCAN LEGACY, LIFE IN ITALY BEFORE THE ROMANS 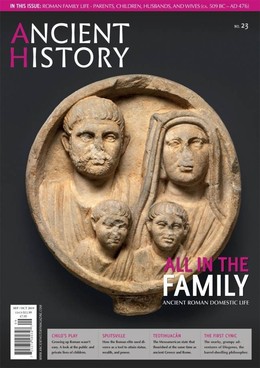 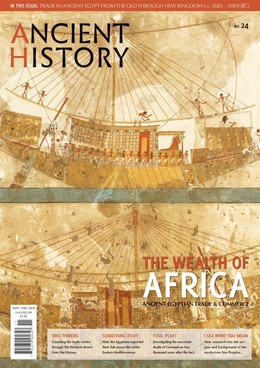 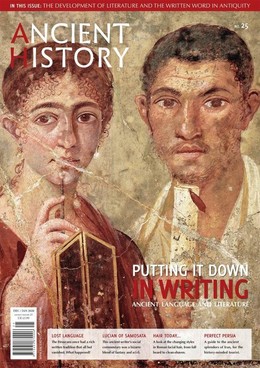 ANCIENT HISTORY MAGAZINE N.25
PUTTING IT DOWN IN WRITING, ANCIENT LANGUAGE AND LITERATURE 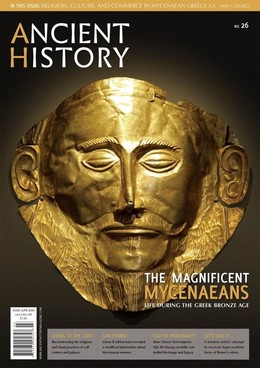 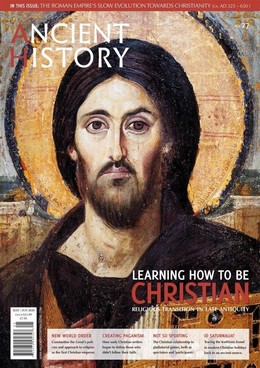 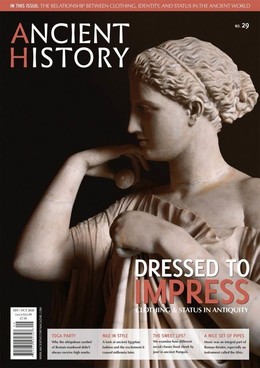