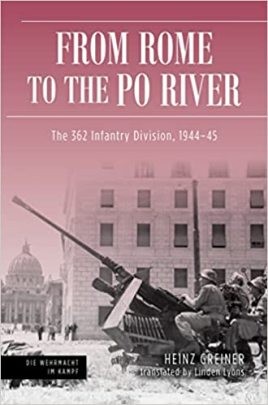 FROM ROME TO THE PO RIVER

The German perspective of the battle of Rome.

In late 1943, 362. Infanterie-Division was formed around the remnants of 268. Infanterie-Division, which had been disbanded after high casualties on the Eastern Front. It fought at Anzio in early 1944, overrun when the Allied broke through the German lines in April. During its time at Anzio, the division was involved in the Benedicta massacre.

The unit was withdrawn to Rome. Facing the Allied advance, it suffered further losses and had to be rebuilt once more. Returning to the front, it then fought until late April 1945, when it surrendered.

This account focuses on the efforts of 362. Infanterie-Division to turn back the Allied forces from their advance north in late 1944 and early 1945. Its commander, Heinz Greiner led the division in a series of counterattacks against Allied forces outside Rome that slowed Allied progress.

While Greiner did not have access to the unit war diary while writing this account his experience as commander of 362. Infanterie-Division thoughout this period means that it offers a unique insight into the battle from the German perspective well as a thorough account of the reestablishment, training and combat performance of a German division.