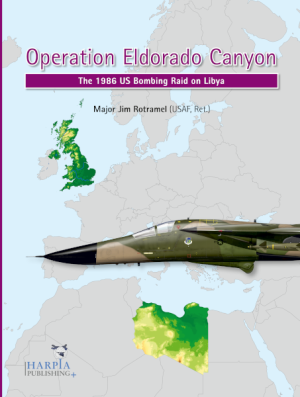 If asked to pinpoint the beginning of the war against Islamic extremism, most would probably say September 11, 2001. However, there has been tension between Islamic autocracies and Western governments going back centuries. In the early 1980s, the boogieman du jour was Libya’s Muammar al-Qaddafi, who sponsored numerous acts of terrorism throughout Europe. After a series of attacks resulted in the deaths of Americans, U.S. President Ronald Reagan elected to strike back.

Operation Eldorado Canyon is usually remembered as a long-range mission by British-based F-111s. However, it was an amazingly complex mission that involved two Navy aircraft carriers and a unique air refueling plan that involved more than half of the then new KC-10 tanker inventory. For the first time, the events leading up to this operation are described, including previously unrevealed contingency operations, missions testing the ability of the F-111s to fly such an extended mission, and the mission itself from the crews that flew it.

The USAF classified ‘forever’ the names of the F-111 crews who participated in the mission. After a 20-year reunion of the participants at RAF Lakenheath, one of the planners, Jim Rotramel, began collecting their recollections. He was later able to expand the story to include the KC-10 part of the mission. Finally, thanks to being a member of the informal Old Geezer Fighter Pilots, he made contact with the Navy veterans who participated in not only Eldorado Canyon, but also Operation Prairie Fire the month before that saw the first combat employment of the Harpoon anti-ship missile.

Like any post-mission fighter pilot debrief, this book lays out the conduct of the mission—the good, the bad, the ugly and even the humorous! It’s a truly unique insight into what it was like to plan and execute this daring mission and how it could have ended as a humiliating disaster at several points.