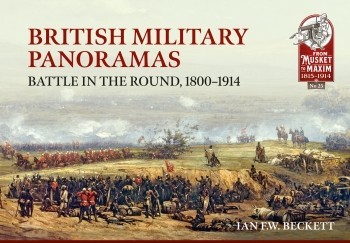 Originating in Britain in the 1780s, 360º panorama paintings were extremely popular in the nineteenth century and over 300 large-scale panoramas were painted worldwide during this period. From the beginning, battle was a popular subject, and surviving examples include Gettysburg, Atlanta, Sebastopol, Borodino, and Waterloo. Many of the survivors from the late nineteenth century have been extensively restored and renovated and it can remain a special experience to visit one.

Battle panoramas were highly regarded in Britain, bringing together art, patriotism and mass entertainment in ways that reinforced Britain’s expanding global presence. Those displayed by Robert Barker, Henry Aston Barker, and Robert Burford at the celebrated Leicester Square rotunda between 1800 and 1863 included such subjects as the battles of Waterloo (1815) and Sobraon (1846), and the siege of Sebastopol (1854–55). The rival rotunda in Spring Gardens displayed the memorable canvasses of the Scottish artist, Robert Ker Porter, including the storming of Seringapatam (1799) and the battle of Alexandria (1801). During the substantial revival of interest in the last quarter of the nineteenth century, panoramas were devoted to such battles as Balaclava (1854), Tel-el-Kebir (1882), and Omdurman (1898).

Throughout the nineteenth century, there were also ‘moving’ panoramas - series of scenes wound between rollers - covering colonial engagements from Africa to India and touring provincial cities and towns. Panorama al-fresco were outdoor extravaganza incorporating painted backdrops, actors and pyrotechnics at venues such as the Royal Surrey Gardens and Belle Vue in Manchester. All these artistic forms and the reaction to them on the part of art critics, veterans and the wider public are fully described in this unique contribution to the story of British military art.