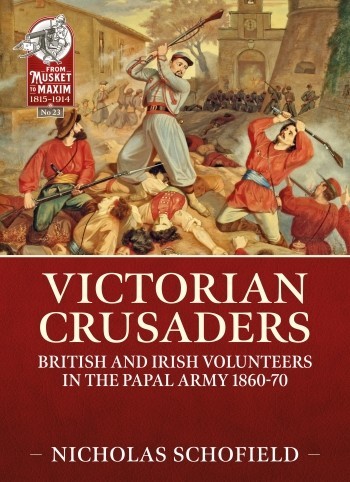 British and Irish Volunteers in the Papal Army 1860-70

The struggle for Italian Unification brings to mind images of patriotic heroes such as Garibaldi and Mazzini. However, there is another side to the story: thousands of Catholics from across Europe (and beyond) volunteered to defend the pope from those who threatened his authority and his kingdom. These nineteenth century ‘crusaders’ included around 1,600 from England, Wales, Scotland and Ireland.

This book focuses on the turbulent period between 1860 and 1870, which saw a Piedmontese invasion of the Papal States (1860), an attempted capture of Rome by Garibaldi (1867) and finally the newly formed Italian Army’s attack of 1870, which left Rome as the kingdom’s capital. It was also a time of reform and modernisation in the pontifical army, with at times inspired leadership and the introduction of new weapons and technologies.

In addition to examining the campaigns, the showpiece actions at Castelfidardo, Mentana and Porta Pia, and the political and religious context, Victorian Crusaders studies the backgrounds, motivations and experience of those who flocked to Rome from the British Isles. The Irish joined the Battalion of St Patrick in 1860 and others subsequently signed up for the Pontifical Zouaves, a glamorous transnational unit whose uniform was inspired by the warriors of the Algerian mountains. They came from varied backgrounds, including members of the aristocracy and future members of parliament, though most came from the middle classes.

Most foreign recruits knew that the odds were heavily stacked against them, but they also understood the importance of standing up for their beliefs and the value, as they saw it, of sacrifice and martyrdom. Their experience provides a fascinating insight into Victorian society, large sections of which were proudly in favour of the Italian Risorgimento and often anti-Catholic in their sympathy. Indeed, for the Irish especially, joining the pontifical army was a way of scoring a point against the Protestant English and asserting their national aspirations.

Based on contemporary accounts and archives, Victorian Crusaders for the first time studies the Catholic volunteer movement between 1860 and 1870 from a British and Irish perspective.