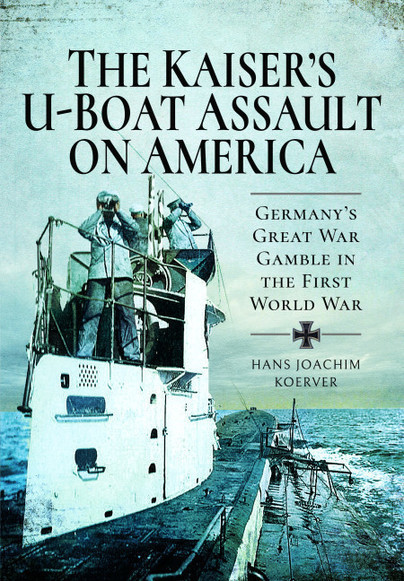 THE KAISER'S U-BOAT ASSAULT ON AMERICA

Why did a long time reluctant US President Wilson finally enter World War I on the side of the Allies in April 1917?

In retaliation of the British naval blockade of Germany since August 1914, the German Admirals determined at the beginning of 1915 to create a counter-blockade of the British Isles with their submarines. The U-boat commanders got – without knowledge of the government - a secret order to sink Allied passenger liners. The British Admiralty discovered the hunt for passenger liners by deciphering W/T messages to the U-boats. The sinking of the Lusitania on May, 6th, 1915, was no coincidence – the Royal Navy knew about the intentions of the U-boats and, after doing everything to protect the passenger liners in the beginning, they simply left the Lusitania alone in in the first week of May, to create frictions between America and the German Empire. A diplomatic quarrel between US President Wilson and Germany about U-boat warfare commenced.

In spring of 1916 the German Navy acted again against the instructions of the Kaiser and ordered secretly the sinking of allied and neutral vessels in the British Channel, thereby opening an unrestricted U-boat war. When the channel ferry Sussex was attacked, Wilson threatened to break off of diplomatic relations with Germany. Under massive diplomatic pressure the German government had to give in. Further on, their U-boats only conducted a “soft”, restricted warfare, following the internationally agreed maritime rules and tolerated by Wilson.

In Germany a heated debate set in after the Sussex case. The Navy promised the quick defeat of England by unrestricted U-boat war, and the Army joined this campaign end of 1916. The intention of the “war party” was to rule out any possibility of a negotiated peace and to set the German Empire on a – risky - course for definitive victory. But the government doubted the Navy’s capability for all-out U-boat warfare and argued that the only definitive result would be an America siding the Allies, leading to ultimate defeat. In the last months of 1916 it sent out peace feelers to Wilson, warning him, that in the case of a failure of his peace mediation they would get under unbearable pressure of the “military opposition” to begin unrestricted U-boat war again.

At this time Britain was – like Germany – economically with its back against the wall: it suffered terribly by the sinking of its merchant ships, the moral of its Admiralty in Anti-Submarine-Warfare had completely broken down. Collapse was threatening.

But the British government got wind of the conflicts inside Germany by the deciphering of the diplomatic cables between Wilson and the Germans. The new Prime Minster, David Lloyd George, chose a risky strategy – by rebuffing all American peace efforts he wanted to encourage the radical party in Germany to enforce total U-boat war.

Finally this British strategy payed out: German Navy and Army pressed the Kaiser to declare unrestricted U-boat war from 1st of February 1917 on, and Wilson broke off diplomatic relations. But he still bristled to enter the war on Allied side – as long as American ships would be treated correctly by the Germans, he wouldn’t come in, not even after the publication of the Zimmermann-telegram.

The tipping point came in the middle of March, when U-boats torpedoed American vessels without warning. This forced the American Declaration of War against the German Empire on April 6, 1917.