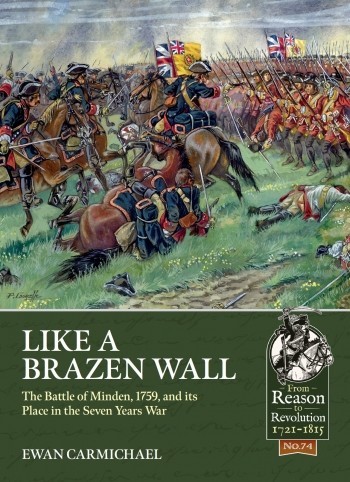 The Battle of Minden, 1759, and its Place in the Seven Years War

The Battle of Minden is justifiably celebrated by the British infantry and artillery regiments involved, but it was a close-run affair. Like a Brazen Wall echoes that celebration, but also sets a fresh balance: appropriately applauding, where due, the dash and élan of the French and Saxon opponents who are worthy of respect; examining the enduring challenges of multinationality by considering the relationships between Britain and her German allies; critically reviewing the role of the leader by reconsidering the strengths and weaknesses of Prince Ferdinand of Brunswick; reviewing the role of the British horse and its controversial commander, Sackville.

The battle and the operations leading up to it provide lessons in leadership, command and control, communications, understanding of terrain, manoeuvre, deception, concentration of force, mutual support, liaison with allies, and discipline.This book explains the strategic necessity of British involvement in an Anglo-German allied army in Europe as well as describing the tactical detail of Minden and the parallel battle of Gohfeld.

Using translations of French primary and secondary source material, the intentions of the French commander are reviewed.

A commentary of the battle is provided, including a review of the effectiveness of British musketry.

The reader is assisted in understanding the complex relative chronology of the campaign and the battle by timelines which explain what was happening, and when, in different theatres of operation.

In order make a comprehensive record, orders of battle, uniform details and an illustrated battlefield tour are included.