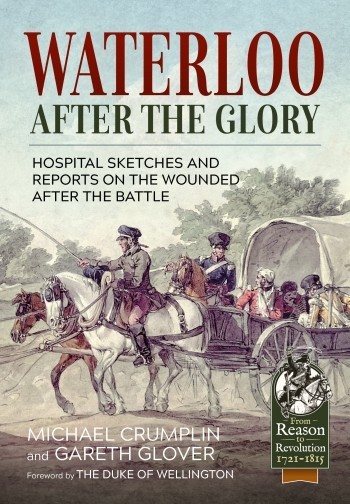 WATERLOO AFTER THE GLORY

Hospital Sketches and Reports on the Wounded after the Battle

The Battle of Waterloo was one of the most horrific actions fought during the Napoleonic Wars. There have been several studies of battlefield injuries and the field care that casualties received during the campaign of June 1815. However, what happened to the many thousands of injured men left behind as the armies marched away is rarely discussed. In June 1815, around 62,000 Allied and French wounded flooded into Brussels, Antwerp, and other towns and cities of the Kingdom of the Netherlands and swamped the medical services. These casualties were eventually cared for by a wide mix of medical personnel including hundreds of ‘Belgian’ surgeons, most of whom had trained in the French Service de Santé and who assisted in the dispersal, treatment, and rehabilitation of thousands of casualties after the battle. New data concerning the fate of the thousands of Allied and some French casualties has emerged from the library of the University of Edinburgh. This has revealed a collection of over 170 wound sketches, detailed case reports, and the surgical results from five Brussels Hospitals. The sketches were carried out by Professor John Thomson, who held the first Regius Chair in Military Surgery appointed by the University of Edinburgh. Most accounts are of Allied wounded, but certainly not all. The accounts, drawings and surgical results dramatically alter our understanding of the management of military wounded in the Georgian army.

“A fascinating, beautifully produced and graphically illustrated account of the military medical services before, during and after the battle of Waterloo...The authors; a general surgeon and medical consultant and specialist Napoleonic historian, are well placed to analyse this new data and by so doing significantly improve our understanding of the management of battle casualties at the time. This is not a book for the squeamish but is highly recommended for both specialist and general readers.” Military Historical Society

"This is an unusual book, dealing as it does with what happened to the wounded after the battle. It comes highly recommended. This is another high quality publication from Helion’s Reason to Revolution 1721-1815 series and a very valuable contribution to the body of knowledge about warfare in that period. It’s a superb reference book but also very readable so one to dip into and come back to." The Waterloo Association

"This is a useful addition to the genre of military medical history, particularly for the Napoleonic period. Waterloo After the Glory is handsomely produced and well illustrated, with numerous images of contemporary medical men and the principal allied hospitals in Brussels and Antwerp. The original sketches are faithfully reproduced by Helion, giving this study an intimacy that is so oftern lacking in battlefield studies." Journal of the Society for Army Historical Research