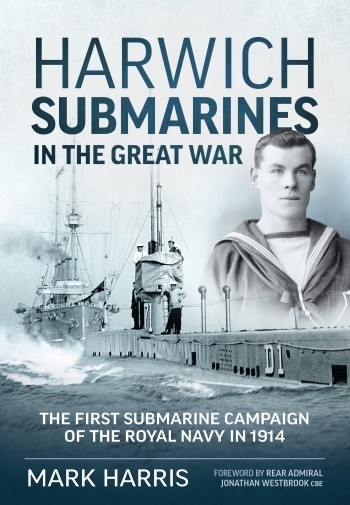 HARWICH SUBMARINES IN THE GREAT WAR

The first submarine campaign of the Royal Navy in 1914

The Harwich Submarine Flotilla played a key role establishing British dominance in the North Sea at the beginning of the First World War. Letters, diaries, memoirs and combat reports of the participants are used to give a complete account. Much of this is in print for the first time. The foreword has been written by Rear Admiral Jonathan Westbrook CBE, former Royal Navy Submariner. Written in collaboration with the Friends of the Royal Navy Submarine Museum, profits from royalties are contributing towards the work of the Museum. Both official and personal archive material is used to tell the story, sourced from British, German and French archives. The text is illustrated by charts and plans prepared using the patrol reports, war diaries and logs of the submarines and warships that took part. The war experience of the participants is brought to life, giving a real insight into what it was like to fight in these early submarines, whilst also relating what really happened and the true significance of the events. The Flotilla had to battle not just the enemy, but also the hazards of mines, human frailties, mechanical failure and the weather.

The story of every patrol in the 1914 campaign is told. This campaign saw the first torpedo fired in action by a Royal Navy submarine, the first ship to be sunk and the first submarine to be lost in action. The commanders of the submarines were true pioneers, working out for the first time how to wage war with the latest technology of their age. Their patrols took submarine crews and commanders constantly onto the front line of the naval war to face a multitude of hazards. Many paid the ultimate price, with the Flotilla losing three submarines and almost all of their crews in this first campaign. Success brought the names of figures like Roger Keyes and Max Horton to prominence. The early story of the Flotilla is also the story of a pivotal point in their journey to become key figures of the Royal Navy in the twentieth century. For others, even those who would go on to great fame as submariners, such as Martin Nasmith, it would be a challenging start to their wartime careers.