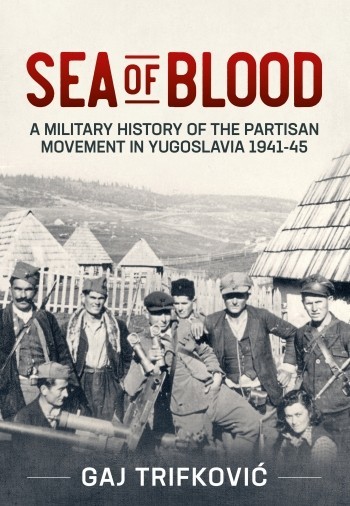 A Military History of the Partisan Movement in Yugoslavia 1941-45

he Second World War on the territory of the former Yugoslavia was marked by extraordinary complexity and base brutality. At least twelve factions fought against and worked with each other in what was at the same time a liberation war, a civil war, and a revolutionary war. The human cost was staggering: out of the pre-war population of roughly 15 million, more than one million died as a direct result of the conflict.

Sea of Blood follows the creation and rise of the communist-led People's Liberation Movement and more specifically its combat arm, colloquially known as the Partisans. Sea of Blood also deals heavily with Axis counterinsurgency efforts, particularly those carried out by armed formations of the Third Reich. Although the past decade has seen a steady rise in the number of academic publications in English dealing with various military aspects of the war, none of them offers comprehensive coverage of the entire conflict. The main deficiency of most scholarly works from outside of what was once Yugoslavia is the over-reliance on Axis/non- Yugoslav primary sources; Sea of Blood seeks to redress the imbalance by drawing heavily on both original Yugoslav documents and a vast array of secondary sources published in the region over the past 70 years. The text also cites unpublished materials from more than a dozen archival institutions including NARA, TNA, TsAMO, BA/MA, Military Archives in Belgrade, and national archives from practically every former Yugoslav republic.

Sea of Blood will find a readership among all those interested in the Second World War in Yugoslavia, the history of guerrilla warfare, and the contemporary history of the Western Balkans. The main narrative is divided into seven chapters. Additional information is provided in the introduction (which comes together with a bibliographical survey) and three appendices, which contain a short treatise on human losses, as well as tables and organizational charts; the text is accompanied by 14 maps.