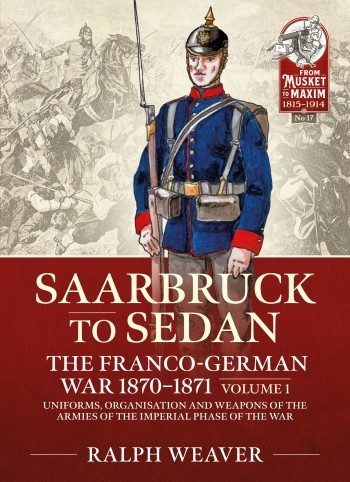 VOLUME 1 - Uniforms, Organisation and Weapons of the Armies of the Imperial Phase of the War

The Franco-German War of 1870-71 saw the demise of one empire, that of Napoleon III and the birth of another, a German empire under the rule of the king of Prussia.  Many books have been written on the campaigns and battles of the war, this is the first to centre on the armies themselves: how they were organised, how they were armed, what uniforms they were dressed in and how they were supplied with the essentials of war. Technical innovations changed the way armies behaved in the field, railways speeded up movement, the telegraph delivered orders in a fraction of the time and new weapons altered tactics used on the battlefield. How many uniforms did a Prussian soldier have and who made them? The newest and best uniform was reserved for ceremonial use and to go to war in! Other orders of dress were issued from regimental stores for parades, day to day wear, field exercises, fatigue duties and walking out. If a man had the cash, he could buy a uniform for going to the pub on Saturday night! And the French were not to be outdone, a description of a Guards’ officer’s kit lists nine different orders of dress, without including ball and evening dress.  In France most uniforms were made by private contractors working to government contracts while Prussian battalions, squadrons and batteries had a depot company of artisans who made up soldiers’ uniforms from government supplied cloth.  Officers had their uniforms made by private tailors.

Developments in armaments were not limited to the French, the chassepot rifle was a marvel and the mitrailleuse (a volley gun) could have been a war winner if used properly. The Bavarians had a mitrailleuse of their own design and they developed a modern rifle firing a metallic cartridge at a rate of 20 shots a minute.  As well as recently published references, many contemporary works have been used either in their original form or now available as digital copies from French and German sources.  Many English language sources have also been used, Australian, New Zealand and American newspapers all reported on the war for their readers. There were also many memoirs from soldiers, officers and men as well as diplomats, volunteers, combatants and those ministering to the wounded. Equipment is described as well as the medals many men wore on their chests.  The colour section illustrates many of the lesser known uniforms worn during the war.  Annotated reading list. 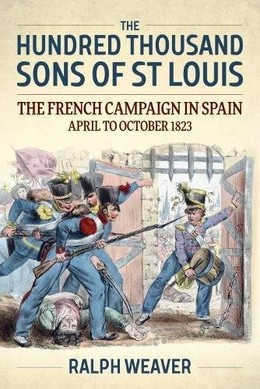 THE HUNDRED THOUSAND SONS OF ST. LOUIS
The French Campaign in Spain April to October 1823