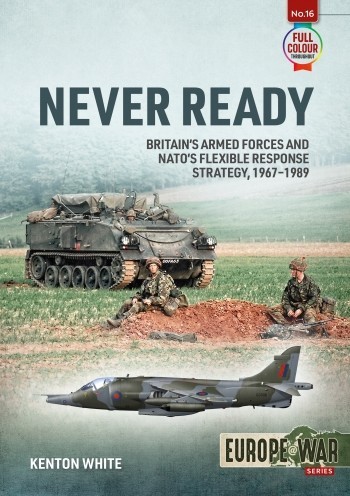 Was Britain’s implementation of NATO strategy credible? After the adoption of Flexible Response in 1967 NATO relied on conventional forces to defend the West. Britain had a central role in NATO’s plans, but was British defence planning adequate for the task? How did the Government plan for the use of the conventional Armed Forces for the range of operations it was committed to? How were the Armed Forces to be Mobilised, and what was the detail of the planning for mobilisation?

In 1967 MC14/3 was adopted as the overall strategic concept by NATO. It relied on an escalatory deterrence, from conventional through tactical nuclear strikes to strategic nuclear attack. This is commonly known as Flexible Response and replaced NATO’s trip-wire response. The declared principal of the strategic concept was to reduce the chance of mistakenly starting a nuclear war, meeting force with like force, and raising the nuclear threshold in the event of actual war.

By using newly available documents from British and other archives, this volume will show that far from being a flexible strategy, in the event of a war it was doomed to failure. The concept was compromised by the failure of the Alliance members to provide one of the main legs of the conventional deterrent – sustainability.

This book analyses the paradox between the public face of defence policy and the practice.  The book assesses whether the planning would have worked, and what would have happened in Europe if war had broken out. To answer this question the research looks at the conflicts in the Falklands and the Gulf to assess the feasibility of the plans in place.

Elements upon which British defence depended were still being built more than twenty years after the new strategy was adopted. Defence policy in Britain was concerned less with the threats the country faced than with just how little could be spent on defence.

Never Ready is extensively illustrated with contemporary photographs, many in colour, and specially commissioned diagrams, colour artworks and maps.