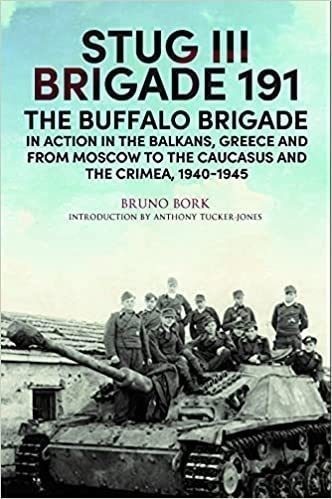 The Buffalo Brigade in Action in the Balkans, Greece and from Moscow to Kursk and Sevastopol

Based on their experiences during the First World War, the Reichswehr decided that the infantry support gun of the future should be an armoured, motorized vehicle with an effective calibre of cannon: the Sturmgeschütz III. The weapon was used in the ‘fire brigade role’ at hotspots along the Front, where it was much feared by enemy forces.

This illustrated volume tells the tale of Brigade 191, aka the ‘Buffalo Brigade’, who used the Sturmgeschütz III as they took part in Operation Barbarossa in the Ukraine, saw action during the fight for Greece in 1941 and were deployed to the areas of heaviest fighting in the campaign against the Soviet Union. This began with the infantry advance from Ukraine to Moscow (1941): then to Voronezh, Kursk, the Caucasus and Kuban (1942), then the Kertsch Peninsula and the Crimea (1943-1944), before they were finally evacuated from Sevastopol into Romania by naval lighters. On the South-east Front (the retreat through the Balkans), the Brigade fought its way into Austria and was still fighting on the last day of the war to keep a corridor open.

Keen to write an account recording the tactical significance of the Sturmgeschütz III, while surviving members of Brigade 191 also wished for a cohesive documentary record of the war, Bork set about gathering military records and literature, as well as interviewing as many ex-Brigade men as possible, in order to bring this detailed account into being.