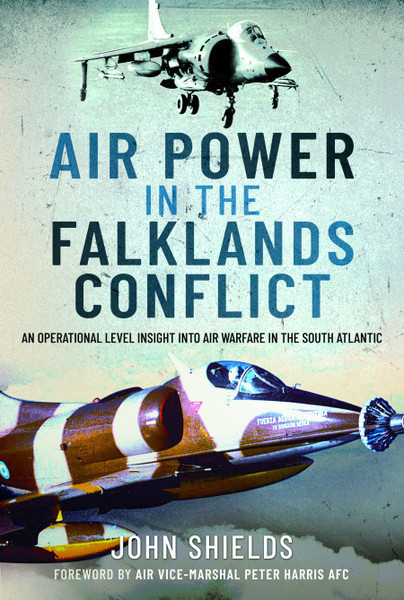 AIR POWER IN THE FALKLANDS CONFLICT

An Operational Level Insight into Air Warfare in the South Atlantic

From the television footage shown in all its stark reality and the daily coverage and subsequent memoirs, the impression delivered from the air battles in the Falklands Conflict was that of heroic Argentine pilots who relentlessly pressed home their attacks against the British. While, by contrast, there is a counter-narrative that portrayed the Sea Harrier force as being utterly dominant over its Argentine enemies. But what was the reality of the air war over the Falkland Islands?

While books on the air operations have published since that time, they have, in the main, been personal accounts, re-told by those who were there, fighting at a tactical level, or back in their nation’s capital running the strategic implications of the outcome. But a detailed analysis of the operational level of the air war has not been undertaken – until now. At the same time, some analysts have inferred that this Cold War sideshow offers little insight into lessons for the operating environment of future conflicts. As the author demonstrates in this book, there are lessons from 1982 that do have important and continued relevance today.

Using recently released primary source material, the author, a serving RAF officer who spent two-and-a-half years in the Falklands as an air defence navigator, has taken an impartial look at the air campaign at the operational level. This has enabled him to develop a considered view of what should have occurred, comparing it with what actually happened. In so doing, John Shields has produced a comprehensive account of the air campaign that has demolished many of the enduring myths.

This is the story of not why, but how the air war was fought over the skies of the South Atlantic.