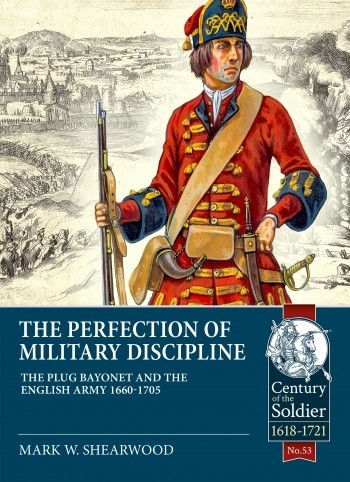 THE PERFECTION OF MILITARY DISCIPLINE

The book re-evaluates both the plug bayonet as a weapon and its implementation which fundamentally changed how it impacted both the formation and tactics of all armies of the long seventeen century. The plug bayonets reputation was marred by General Hugh Mackay following his defeat at the Battle of Killiekrankie on the 27th July 1689 when he supposedly stated: ‘his men were defeated by an unforeseen technical flaw in their weaponry [plug bayonet]’. This view of the plug bayonet has been re-iterated constantly over the following 300 years, with military historian’s sideling the plug bayonet as a dead-end technology with little to commend it.

While the introduction of the bayonet was a monumental step in the development of infantry in infantry tactics from pike to shot, one chapter will look at some of the other important developments with military technology. It will look at the arguments of matchlock vs flintlock and how they developed, and the introduction of Chevaux de frise, etc. It will prove that unlike some previous assertions, advancements within this sphere were not linier in nature. I will show that the adoption of the bayonet or the re-adoption of the pike were down to individual regimental colonel’s perception of these weapons, and in some cases the overall general in charge of specific operations.

The following chapter investigates the changes within infantry battalion drill’s and organisation. How foot battalions went from up to one third of all soldiers armed only with defensive weapons (the pike) to battalions fully armed with both offensive and defensive weapons, the musket with bayonet. This development increased the firepower of any one battalion by up to one third, a step which was as a direct consequence of the introduction of the plug bayonet.

The book will show that the plug bayonet was not only in use with English forces during the Dunkirk campaign in the early 1660’s, but the English establishment bought into the idea of the plug bayonet earlier than previously thought and placed large orders from the 1670’s, with the Board of Ordnance ordering 10,000 plug bayonets in 1678. Additionally, it will show that contemporary privately printed drill manuals are a valuable and accurate tool for identifying changes in military drill. It will identify how issues of supply and demand affected both English and continental armies.

This is the first book whose primary focus is on the plug bayonet and its lasting impact on military tactics and equipment. The book will highlight that a piece of technology, which was derived from a civilian hunting weapon developed to hunt boar’s during the 16th century, that was still in use as such in Spain and Germany in the 19th century, transferred to an important piece of military equipment. As such, the plug bayonet was in use with the English army from c1660 until after 1700, being in use for over 40 years of service and as such does not deserve its reputation as a failure.