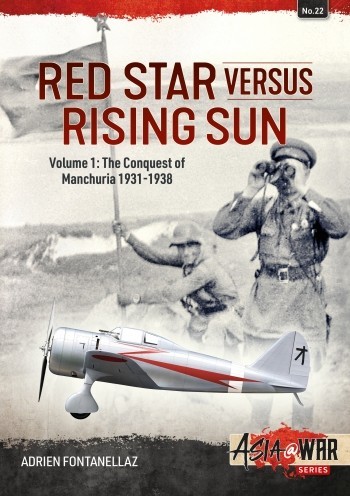 During the first half of the 20th century, Czarist Russia and then the successor Soviet Union, fought a series of undeclared wars against the Empire of Japan in the Far East. The Russo-Japanese War of 1904-1905 was fought over rival imperial ambitions in Manchuria and Korea and ended in a Japanese victory that would leave the Imperial Japanese Army with a sense of self-importance, a belief that the offensive spirit could overcome all obstacles and a strong conviction that the ends would justify the means.

As the century continued, Japanese forces expanded into China and created the puppet state of Manchukuo that would become a vital resource for further imperial ambition. This expansion inevitably brought the empires of the Rising Sun and the Red Star ever closer on the ground, and in 1938 the two armies clashed at Lake Khasan, the first of a number of battles that would have far reaching consequences for the course of the world war to come.

Volume 1 of the Red Star versus the Rising Sun mini-series examines the origins of the rapidly modernising Imperial Japanese Army and its expansion, largely unfettered by civilian political constraints, into mainland Asia from the late 19th century up until 1938. It examines the culture, structure and equipment of the IJA and its campaigns in warlord-era China, along with an overview of the purge-ravaged Red Army of the same period. This volume culminates in a detailed description of the major clash of the Soviet and Japanese armies at Lake Khasan in 1938. Volume 1 of Red Star versus the Rising Sun includes a range of specially commissioned colour illustrations of the men, AFVs, artillery pieces and aircraft that fought at Lake Khasan in 1938.