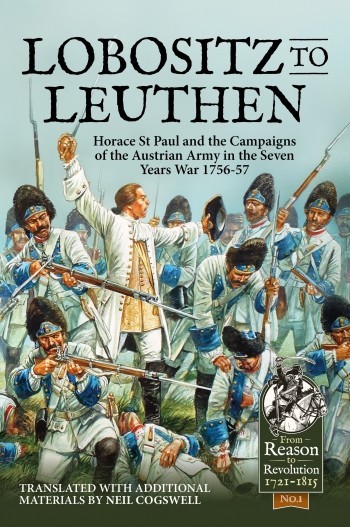 FROM LOBOSITZ TO LEUTHEN

In 1751, at the age of 22 and then a law student, Horace St Paul had, as he described it, “a difference” with an older man over the favour of a lady. This “difference” resulted in the death of the older man in an impromptu duel to which there were no witnesses. The investigating coroner directed that St Paul should stand trial for willful murder. With no confidence in the outcome, St Paul fled to France where such affairs of were looked on in a different light. He declined to return home to England to stand trial and was outlawed.

St Paul was a handsome young man who was possessed of considerable social graces and received a liberal allowance from his father. From France, he moved to Brussels, where he was accepted at the Court of Prince Charles of Lorraine, Governor-General of the Austrian Netherlands and brother-in-law of Maria Theresa, the Empress Queen. In 1756 Frederic II of Prussia invaded Saxony thereby precipitating a general war in Europe. Prince Charles of Lorraine confidently expected to be appointed to the chief command of the Austrian army, once it was fully mobilised. The Prince thought sufficiently well of St Paul to offer him a post at his side as aide-de-camp and sent him to join Marshal Browne, then commanding in Bohemia, as a volunteer to learn something of soldiering. St Paul joined Marshal Browne shortly before the Austrain army advanced to attempt to relieve the Saxons, then besieged at Pirna. Having no regimental duties St Paul kept a journal of the day to day operations of the Austrians, thereby learning his new trade. He was present at the first major action of the war at Lobositz. The following year, now in the suite of Prince Charles of Lorraine, St Paul was present at the great battle outside Prague and was subsequently besieged in that city. He was also in a position to gather eyewitness accounts of other actions – notably that at Kolin – as he accompanied the victorious Austrian forces on their advance from Bohemia into Silesia while the King of Prussia was away seeking to prevent the armies of France and the Empire from re-conquering Saxony. Once in Silesia the Austrian army besieged and stormed the great fortress of Schweidnitz and then crushed the remains of the Prussian army outside Breslau and captured that Capital city. Nike, the capricious Goddess of Victory, had crowned the triumphant Austrians. Nemesis, the Goddess of Retribution, had other ideas. One month after his stunning victory over the French and Empire forces at Rossbach, King Frederic of Prussia hurled his outnumbered and weary troops against the Austrians at Leuthen just outside Breslau.

The Journal of St Paul is a day by day account. He is not shy to write “Nothing happened”, also when the action is hottest he can be understandably brief. As a man learning his trade, he often records details of almost arcane significance. As his original editor George Grey Butler noted: “This is not history, but it is the stuff from which history is written.” Accompanying the text are a detailed Gazeteer and Lists of Persons and Regiments indicated in the text as well as 232 plates of maps and plans on which the reader can follow the operations described. This is a landmark work in the history of the Seven Years War. A continuation of this Journal, describing the Campaigns from 1758 to 1760, has been published as From Olmütz to Torgau.

“Given the scarcity of accessible first hand source material in English, and the extent to which accounts are interwoven, this is the best Seven Years War buy of the decade so far from a wargames perspective.” Miniature Wargames

“This incredible account of the years 1758 to 1760 introduces a number of minor characters who you won't find in general histories of the war, but who nevertheless played a major part in the conflict.” Books Monthly 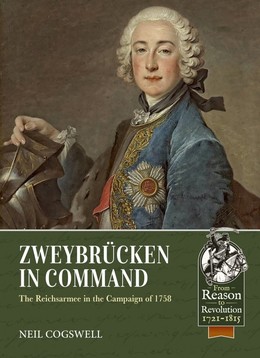 ZWEYBRUCKEN IN COMMAND. THE REICHSARMEE IN THE CAMPAIGN OF 1758
REASON TO REVOLUTION 1721-1815