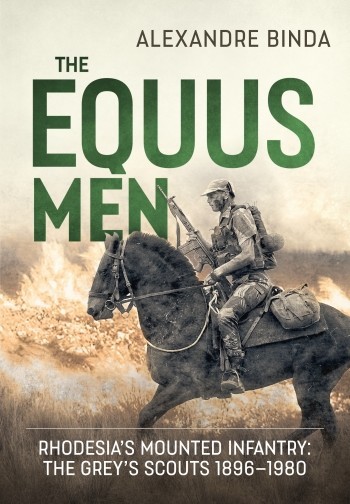 This all new work by accomplished military historian Alexandre Binda, former paymaster to the Grey’s Scouts, tables the remarkable story of Rhodesia’s mounted infantry, the Grey’s Scouts. Working closely with the last commanding officer, squadron commanders and a whole host of regimental personalities, all of whom have given The Equus Men their unequivocal support Binda has enjoyed unparalled access to thousands of pages of archival documents and many hundreds of previously unpublished photographs. Here, he has traced the Grey’s from their early origins in the Matabele Rebellion of 1896, where an ‘unassuming Englishman, the Honourable George Grey’, found himself originating a body of horseman named the ‘Bulawayo Field Force’, through to the formation of the Animal Transport Unit (ATU) which went on to become the Mounted Infantry Unit (MIU). With the skill of a practiced narrator, Binda takes the reader through these early days to the establishment of the Grey’s Scouts in the Rhodesian Army order of battle in 1976. Deployed to great effect during the bitter Rhodesian Bush War of the late 1960s – 1970s, the mounted operations conducted by the Grey’s are succinctly and clearly detailed. Some of the contacts related make for astonishing reads and with the lively, vibrant, text one can almost feel the steaming sweat of rider and mount; sense the pounding adrenaline; hear the thundering hooves as a fearful enemy is pursued to battle’s inevitable conclusion. Suffice to say, The Equus Men makes for an engaging read. Trained and utilised as mounted infantry as opposed to cavalry, the Grey’s Scouts saw exceptional success in the field. Lightly equipped, they were able to cover great distances at speed, live off the veldt with minimal support and through ‘shock action’, quickly engage and destroy insurgent forces. Originally a regular formation, the Grey’s Scouts were augmented by Territorial and National Service soldiers as the conflict progressed and by 1980, when hostilities ceased, the Regiment numbered some 600 soldiers, both men and women, black and white. With its informative text and rich profusion of photographs, The Equus Men is a stunning tribute to the equestrian and fighting prowess of the Grey’s Scouts. It is a remarkable story and one that is ever more relevant, given recent mounted and pack horse operations conducted by British and US special forces in Afghanistan.