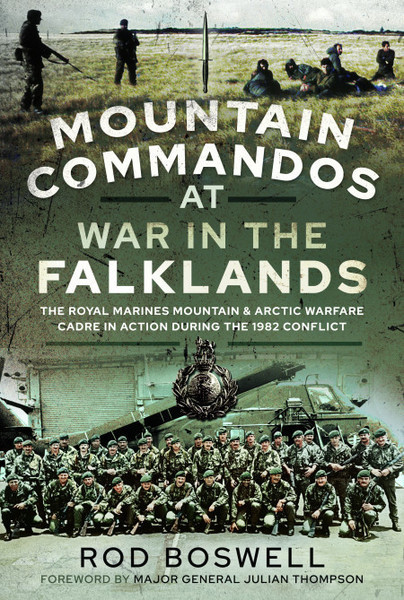 MOUNTAIN COMMANDOS AT WAR IN THE FALKLANDS

Sunset, 8 June 1982, East Falkland. Eight specially trained Royal Marines infiltrate Goat Ridge, a long rocky hilltop between Mount Harriet and Two Sisters which are occupied by a battalion of 600 Argentine infantry. The next day, from their hiding place just metres away from the enemy, they note and sketch the Argentine positions, then withdraw as stealthily as they had come. Their daring patrol provides essential intelligence that guided the British assault which overwhelmed the Argentine defences two days later.

This was just one example of the missions undertaken by the Royal Marines Mountain and Arctic Warfare Cadre during the Falklands War, all of which are described in graphic detail in Rod Boswell’s eyewitness account. Using his own recollections and those of his comrades, he describes their operations in the Falklands – the observation posts set up in the no man’s land between San Carlos and Port Stanley, their role in the raid at Top Malo House, and the reconnaissance patrols they carried out close to the Argentine lines during the conflict.

His first-hand account gives a fascinating insight into the operational skills of a small, specially trained unit and shows the important contribution it made to the success of the British advance. It also records the entire experience of the Falklands War from their point of view – the long voyage south through the Atlantic, the landings, the advance and the liberation of Stanley.