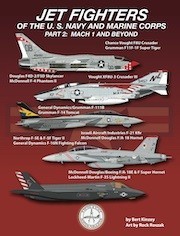 JET FIGHTERS OF THE US NAVY AND MARINE CORPS

Jet Fighters of the U. S. Navy and Marine Corps is a two-book series that describes the entire history of American Naval jet fighters, from the very beginning when many thought that the onset of military jets would mean the end of naval carrier-based aviation, to today when the fifth-generation stealth jet F-35B/C Lightning II has begun its service with both the Navy and Marine Corps.  Both volumes cover every jet fighter that has ever been produced for the Navy and the Marine Corps, and not only those that were used operationally, but even the aircraft that only made it to the flying prototype stage are included.  Also covered by the books is the history of how American aircraft carriers evolved from the ESSEX class ships that won World War II with propeller-driven aircraft to the mighty supercarriers of today.

In the first book, Jet Fighters of the U. S. Navy and Marine Corps, Part 1:  The First Ten Years, author Bert Kinzey described the first and second generation jet fighters that came on the scene at the end of or shortly after World War II.  These jet fighters made their first flights between 1945 and 1954, and the book covers fifteen aircraft arranged according to the chronological order of the date of their first flight.

This concluding volume, Jet Fighters of the U. S. Navy and Marine Corps, Part 2:  Mach 1 and Beyond, resumes where Part 1 left off and continues to the present day.  The evolution of the United States Navy’s aircraft carriers is again picked up and covers continued modifications to the ESSEX and MIDWAY class carriers and to the initial super carriers of the FORRESTAL CLASS.  The follow-on super carriers of the KITTY HAWK, NIMITZ, and FORD classes are discussed to highlight the continued evolution required to handle the ever increasingly sophisticated jet aircraft that have achieved operational status. 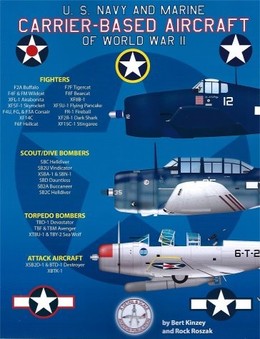 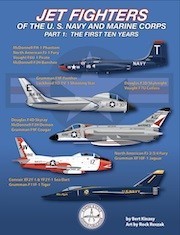 JET FIGHTERS OF THE US NAVY AND MARINE CORPS
Part 1: The First Ten Years