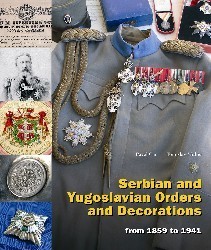 SERBIAN AND YUGOSLAVIAN ORDERS AND DECORATIONS

This illustrated volume with more than 600 pages presents a detailed picture of the development of Serbian, and later Yugoslavian, orders, medals and decorations between 1859 and 1941. This spans a period starting with the first commemorative badges of the principality of Serbia and covers a system of awards that reached its zenith in the later Kingdom of Serbia. After the end of the First World War and the creation of the new kingdom encompassing Serbs, Croats and Slovenes, a great diversity of medals and decorations evolved but this ended abruptly with the collapse of the Kingdom of Yugoslavia in 1941.

More than 600 orders, medals, commemorative badges and more are shown here in a scale of 1:1 and the individual manufacturers and various models are dealt with in depth. Detailed descriptions of these items of highly skilled workmanship are complemented by the inclusion of the relevant ribbons, sashes, cases and certificates.

The authors worked closely with important museums and private collectors to compile this book and were thus also able to present medals belonging to famous historical figures such as the Austrian Kaiser Franz Joseph I, the Turkish Sultan Mehmet V, Grossherzog Friedrich von Baden, Serbian generals Jovan Belimarkovich and Milojko Leshjanin and Minister Jovan Avakumovich among others.

Recently many counterfeit medals and copies have come onto the market. For this reason the authors have gone to great lengths to explain just how to distinguish originals from reproductions and fakes. The world of Serbian and Yugoslavian medals is presented here for the first time on this scale with over 2,000 illustrations. This book is a must for anyone with an interest in medals and decorations as well as those interested in learning more about the historical development of Serbia and Yugoslavia.

circa 1.500 illustrazioni a colori e in bianco e nero