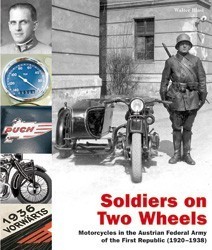 This 320-page illustrated work is dedicated to an unexplored chapter in Austria’s vehicular history, namely the use of motorcycles in the military. The time span reaches from 1903 and the first deployment of two-wheeled vehicles on manoeuvres in the k.u.k. Army, through the Federal Army of the First Republic and the Austrian motorcycles deployed between 1938 and 1945, right up to the demise of the despatch rider in 2008 in Austria’s Second Federal Army. The text is complemented by numerous contemporary photographs as well as graphics and colour photographs of historical motorcycles related to the military from private collections.

Here the reader can discover new and hitherto unknown facts about the testing and purchasing of motorcycles such as, for example, the background of the development of the Puch 800 and the 350 GS. This means that this work on military motorcycles is at the same time a valuable source of information on the civilian models produced by the Puch Works in Graz. The varied perception of Puch motorcycles by their users is particularly significant. Other Austrian brands (LAG and Delta-Gnom) were unable to make their mark in the Federal Army of the First Republic. In an era of economic hardship and political upheaval, the occasional foreign brand also reached the Federal Army, for example NSU, James, Harley-Davidson and Moto Guzzi.

The German motorcycle manufacturer BMW enjoyed unchallenged popularity in Austria’s military, Police and Gendarmerie forces but Austria’s motor industry should not be underestimated in its role in the motorisation of the Federal Army. Government policies dictated that domestic production be supported by commissions from the authorities, although it was not unusual for these measures to be circumvented by individual public departments.

After 1920 financial straits initially hampered the acquisition of motorcycles for the new Federal Army. Although purchasing despatch motorcycles was relatively unproblematic, the circuitous path to finding a suitable, domestically-produced motorcycle and sidecar combination for military use extended almost as far as Germany’s ‘annexation’ of Austria in 1938.

In preparation for the writing of this book, the author spent several years researching sources in the Austrian State Archives and the Archives of the Republic, bringing to light some surprising facts. Based on these records a number of deep-seated rumours can now be dispelled. This book offers many new insights into a neglected chapter of Austrian military and motor-vehicle history.