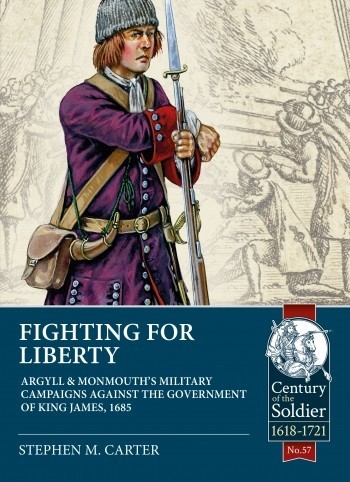 Argyll & Monmouth's Military Campaigns against the Government of King James, 1685

Fighting for Liberty gives a gritty blow-by-blow account of the campaigns of 1685. A conflict that starts in Orkney and ends on the battlefield of Sedgemoor. Today there is a myth that the rebels were a misguided peasant rabble, easily put down by disciplined lines of red-coated soldiers, but this is not reflected in the original correspondence, marching orders, and manuscripts. These tell a vastly different and far more dramatic story, one that pits the British Army against its former victorious captain general, the Duke of Monmouth. A forgotten story that involves marches across mountains, naval actions, and battles over desolate hilltops. After 20 years of research, Fighting for Liberty offers a fresh perspective on the events that became known as the Monmouth Rebellion, and will change your understanding of 1685.

The Whigs have been preparing for an invasion of Britain since 1683. Their aim is to restore the liberty of Parliament and stop divine rule by popish kings. However, the death of Charles II accelerates their design, they load ships with soldiers and empty warehouses of vast stockpiles of the latest weapons, including bayonets, grenades, and firelock muskets. Led by the Earl of Argyll and the Duke of Monmouth, they have an audacious plan to attack in three strategic locations, supported by an uprising in London. With enough drums, colours, and officers to raise well-led and paid armies, the fight for liberty can begin. To counter this threat the government of the new King, James II, locks down the country, closing borders and making arrests across the realm. As the local militia struggle to contain the invasions, and the Whig armies grow day by day, James is forced to rush regular troops to the landing sites. However, even with a network of spies, and the nation's military resources in play, James struggles to gain the initiative against the Whig invaders.

For centuries historians have ignored the planning and logistical aspects of the war, instead they have focused on the personalities of Monmouth, Marlborough, and James II. However, the military campaigns reveal the true scale and tension of the conflict. Fighting for Liberty uncovers the turmoil of 1685, to portray an organised Whig invasion that places the Government and its unprepared forces on the back foot. This fight is no longer a foregone conclusion, instead it is a combat between professional armies, with commanders struggling to gain the initiative, and all facing different operational challenges. Fighting for Liberty details the action as it unfolds, from the initial planning to the Government reaction and the bloody battles. Every step is placed in the historic landscape, and every battle is described, from the armies and officers to the weapons and drill. Fighting for Liberty offers a fresh and vibrant account of the Monmouth Rebellion, the Battle of Sedgemoor and warfare in the late seventeenth century.