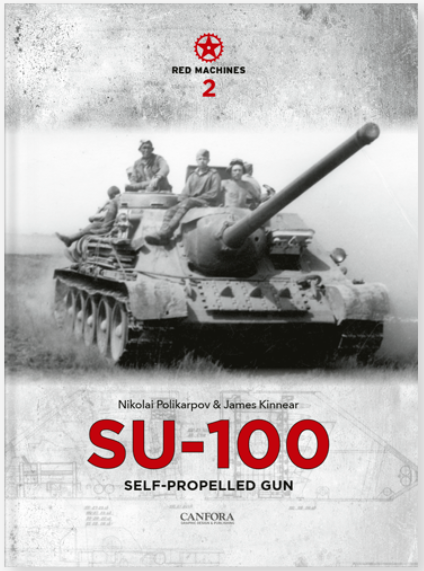 The Red Machines Series is entirely devoted to the hardware of the Red Army. Each volume provide in-depth information, much of it entirely new to the western world, as well as a large number of photos, of which many have never been published to date. Blueprints, drawings, colour profiles and data tables are also provided with each volume, to describe the development and production variants of each vehicle.

The SU-100 was the Red Army’s most powerful medium tank destroyer of World War 2 and was developed for anti-tank fire support to the T-34-85 in the same way as the SU-85 had complemented the original T-34. As with the SU-85 before it, the SU-100 was delayed in entering service.

Although introduced late in the war, the SU-100 was heavily engaged in the final push into the Axis countries, with major combat engagements in Austria, Czechoslovakia, Hungary, and in the assault on Berlin. The SU-100 proved a particularly potent “Zveroboi” or “animal hunter” in that it could easily dispatch Tiger, King Tiger and Panther tanks at medium range. The vehicle had no secondary armament, however, and proved vulnerable when engaged in close fighting without infantry support as occurred during some of these late war battles.

Post-war, the SU-100 remained in Soviet Army service for many years, being subject to several capital repair upgrades over the decades. The SU-100 was also exported in large numbers, particularly to the Middle East, and was produced under licence in Czechoslovakia as the SD-100.