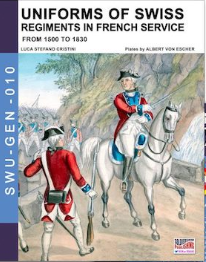 UNIFORMS OF SWISS REGIMENTS IN FRENCH SERVICE FROM 1500 TO 1830

The art of Albert Von Escher

Albert von Escher (born on 20-05-1833 and died on 16-05-1905), was a captain in the Swiss army, but he became well known as an artist thanks to his numerous watercolours with military motifs from the 17th to 19th centuries. Most of his original works in the uniforms of cantonal and Swiss troops, many of which were also in foreign service, were purchased by the Swiss Federal Council for the General Staff Library and have since then been one of the special collections of the former Federal Military Library. The entire collection is contained in 41 albums with red covers. Of these, two are index albums, 33 are dedicated to Swiss cantonal troops and six are dedicated to Swiss troops serving foreign powers such as: France, Holland, Austria, Spain, Prussia, Great Britain, Naples, Rome and Venice.

So far we have never made any anastatic reprint of these originals with the exception of a series of folders with loose cards, mainly dedicated to cantonal uniforms. So, for the most part, all Escher’s artistic production essentially refers to these original plates. 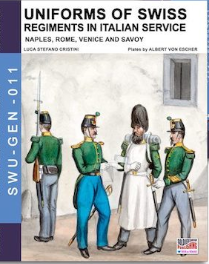 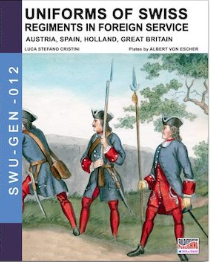