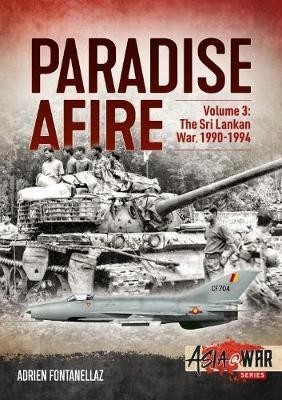 In June 1990, a mere three months after the Indian Peace Keeping Force withdrawal from Sri Lanka, the war between the Liberation Tigers of Tamil Eelam (LTTE) and the Sri Lankan government resumed and was to continue unabated until another cease-fire in early 1995.

This period of the protracted Sri Lankan civil war, known as Eelam War II, saw not only the LTTE evolve into a fully-fledged semi-conventional force, but also gained the reputation of being one of the most innovative and professional armed groups ever. This volume covers in detail the coming into being and the tactics of the Sea Tigers, the movement's naval wing infamous for its swarm tactics, but also the developments related to its intelligence wings and ground forces.

The Sri Lankan armed forces were however no underdog either. To the contrary, and despite numerous flaws that plagued their efforts, they were anything but passive, launching multiple offensives which were part of a cohesive and well thought-out strategy, all the while benefiting from the leadership of several extremely gifted officers, foremost Brig.Gen. Denzil Kobbekaduwa.

The two warring parties thus repeatedly fought each other in battles and campaigns of unheard off size and intensity so far, inflicting telling blows upon one another, but with both failing to gain the upper hand in the long run – until the two  sides entered into a new round of negotiations which halted the conflict – for a mere few months.

Illustrated with over 100 photographs, maps and colour profiles, Paradise Afire Volume 3 continues the story of the internal strife that plagued Sri Lanka in the late 20th Century.