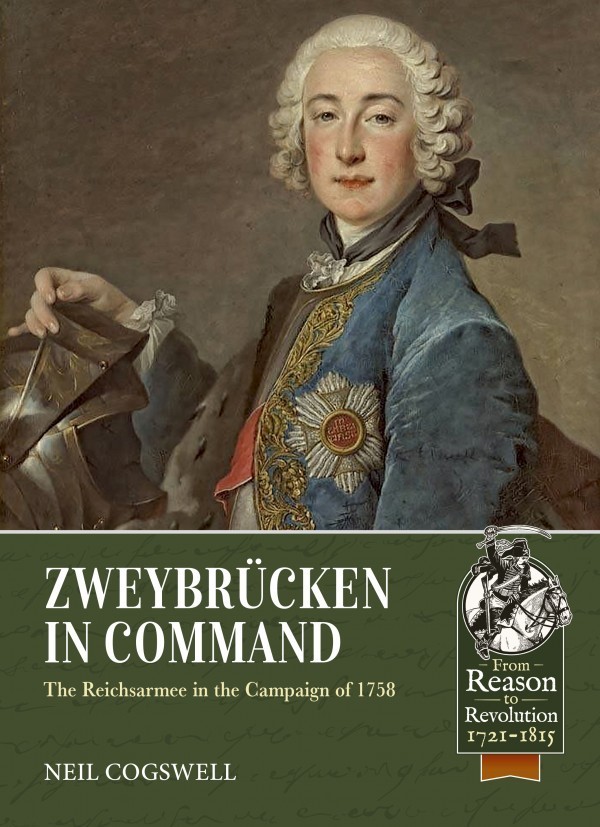 ZWEYBRUCKEN IN COMMAND. THE REICHSARMEE IN THE CAMPAIGN OF 1758

The Reichsarmee – the ‘Amy of the Empire’ made up of contingents from the minor German states – reached the nadir of its fortunes in 1757 with defeat at Rossbach. For the following year’s campaigning, which included the defence of Bamburg, the action at Basberg, the siege of Sonnenstein, and the combat at Eilenburg, it came under the command of Friedrich-Michael, Prince von Pfalz-Zweybrücken, whose initial task was to protect the western borders of the Empire from invasion from Saxony where Prince Henry of Prussia commanded a sizeable army. Later, as Prussian fortunes began to wane, the liberation of Saxony became a prime objective. The core of this volume is the ‘Journal of the Army’, translated from the original French and annotated by historian Neil Cogswell. Although the identity of the author of the original journal is unknown, he appears from his knowledge of events to have bene attached to headquarters, but his writing suggests that he was of junior or even civilian status. As occasion presents itself, the author speaks of the contingents from the Lower Rhine Circle, which included a major part of the Palatinate form which the army’s commander drew his princely title; it is reasonable to suppose that the author came from this circle. The Journal has the flavour of an official record of the campaign. It contains no personal details and makes no comments on the political and supply problems that disrupted the operations. To complement it are therefore appended the letters of the Comte de Boisgelin, a French officer serving with the Reichsarmee, to his good friend Horace St Paul. Boisgelin’s letters, by contrast, are sparse in terms of military detail but illuminating in terms of gossip, speculation, and personal experience. To place the combined account in context, over 50 tables and plates are also included, including maps, order of battle, and colour depictions of the army’s uniforms and flags.