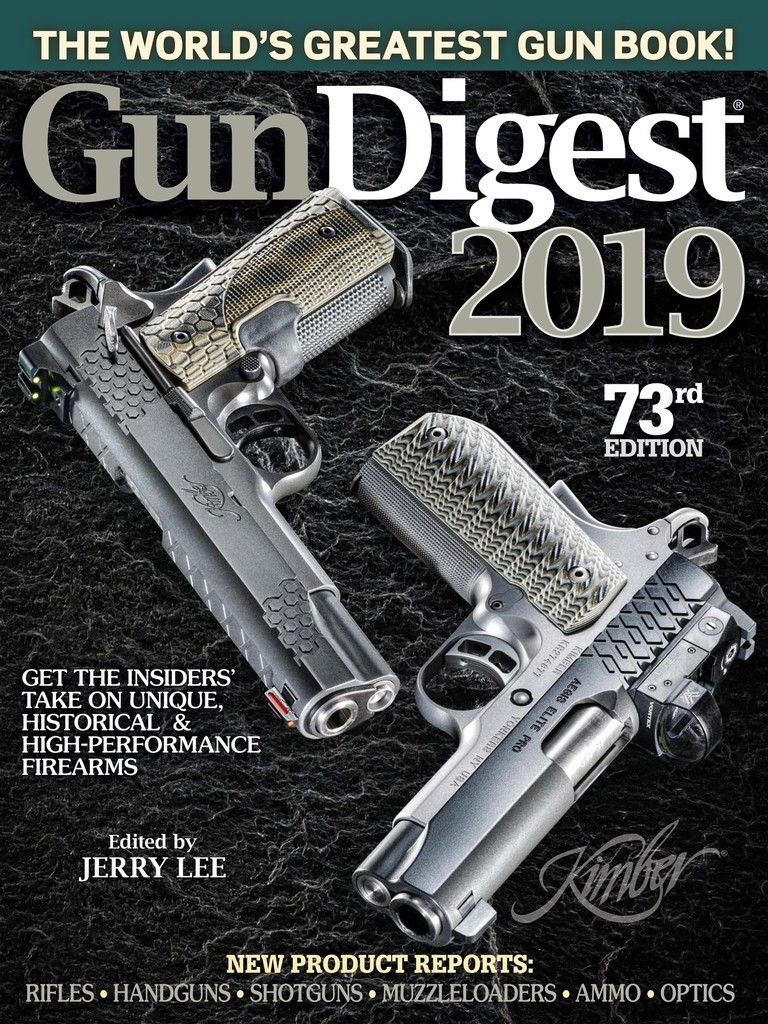 At the heart of Gun Digest 2019, 73 Edition is a roster of in-depth feature articles from some of the top names in gun writing today. Whether you’re a discerning gun collector or practical gun buyer, you’ll enjoy seeing the newest makes and models picked to go under the microscope in the “Testfire” section. If vintage firearms are your thing, the “One Good Gun” stories will inspire you to find the next collectible for your gun safe. On top of all that, our 2019 Firearms Catalog provides you with endless hours of window shopping for hundreds of new and popular models — complete with gun prices! Furthermore, there is no more complete industry reference available today.

For more than 70 years, Gun Digest has been the No. 1 go-to source and research guide for firearms enthusiasts worldwide. Informative and entertaining articles by the top writers in the field cover every aspect of guns and shooting, including hunting, personal defense, target practice, gunmaking and collecting. Historical articles provide a look at the role played by firearms in our country and around the world. Reports from the Field provide details on the newest firearms and accessories. And we present our annual photo essay spotlighting the finest custom and engraved guns. Gun Digest is the most comprehensive collection of firearms information in print today!

Others firearms annuals might claim their book is the word of God writ large. Next to Gun Digest, they prove little more than charlatans. Don’t settle! There’s a reason serious firearms enthusiasts cherish “The World’s Greatest Gun Book” as much as their favorite rifle, and is as vital to their lifestyle as a bottle of Hoppe’s No. 9.

Eulogy for the Hi Power by Patrick Sweeney

A Private Valour by Terry Wieland

Beyond Range of Rebuttal by Jeff Johns

Those Great Quarterbores by Stan Trzoniec

Strange Rifles I Have Known by Paul Scarlata

The Case for Bottleneck Cartridges by Dick Williams

The Combat Magnum by Robert Campbell

My GI Ithaca 1911 by Patrick Sweeney

Taming the .45 Colt by Nick Sisley

Guns of the Brite Ranch Raid by Shane John

Guns of the FBI by Bill Vanderpool

The Model 29 by Rick Hacker

REPORTS FROM THE FIELD

Revolvers & Others by Max Prasac

Web Directory of the Firearms Industry