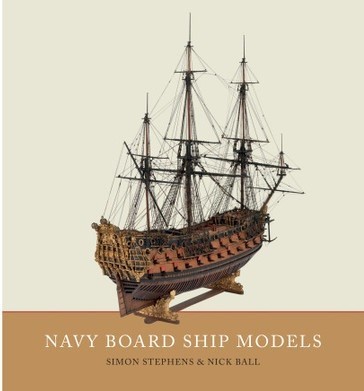 From about the middle of the seventeenth century the Navy’s administrators began to commission models of their ships that were accurately detailed and, for the first time, systematically to scale. These developed a recognised style, which included features like the unplanked lower hull with a simplified pattern of framing that emphasised the shape of the underwater body. Exquisitely crafted, these were always rare and highly prized objects – indeed, Samuel Pepys expressed a profound desire to own one – and today they are widely regarded as the acme of the ship modeller’s art.

Today examples form the highlights of collections across the world, valued both as art objects and as potential historical evidence on matters of ship design. However, it was only recently that researchers began to investigate the circumstances of their construction, their function, and the identities of those who made them. This book, by two curators who have worked on the world’s largest collection of these models at the National Maritime Museum in Greenwich, summarises the current state of knowledge, outlines important discoveries, and applies this new-found understanding to many of the finest models in the collection.

As befits its subject, Navy Board Ship Models is visually striking, with numerous colour photographs that make it as attractive as it is informative to anyone with an interest in modelmaking or historic ships.