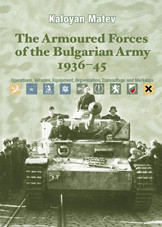 THE ARMOURED FORCES OF THE BULGARIAN ARMY 1936-45

This book provides a detailed history of motor vehicles and armoured fighting vehicles in the Bulgarian Army from 1936, during the last years of peace, until the end of the Second World War in 1945. For much of this period, Bulgaria was allied to Germany. The Bulgarian Army was mainly equipped with German weapons, or equipment captured by the Germans and then sold to Bulgaria. The negotiations as well as supplies of motor vehicles and armoured vehicles are described at length. The combat service of the army's armoured units is also described in detail, firmly based on archival research. Despite Bulgaria's entry into World War II as early as 1941, the only military actions during the first period of the war were related to the occupation of parts of Yugoslavia and Greece. The real combat service of the Bulgarian Army began in September 1944 against its former ally, the Germans. The delivery of armoured fighting vehicles for 1st Bulgarian Army from the Soviet 3rd Ukrainian Front 1945 is described in detail. In addition to a detailed narrative, the author also provides full information covering camouflage, markings, and unit insignia. The authoritative text is supported by over 600 photographs (the majority of them previously unpublished), colour profiles showing camouflage, markings, colour unit insignia and colour battle maps.