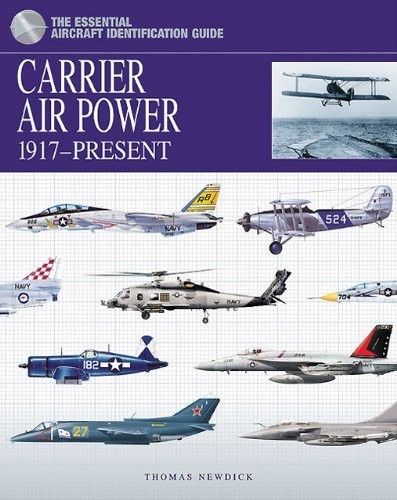 Illustrated with detailed artworks of naval aircraft and their markings, with exhaustive captions and specifications, The Essential Aircraft Identification Guide: Carrier Air Power 1917Present is an extensively researched review of the equipment and organisation of the worlds carrier-based air arms and their deployment in conflicts since the end of World War I. Featuring front-line fighters, bombers and attack aircraft as well as anti-submarine aircraft and helicopters, support aircraft and electronic warfare platforms, this book details the models of aircraft in service with each unit along with their individual and squadron markings. Chapters are divided by nation, profiling the carrier aircraft of the US, the UK, France and Russia, as well as the smaller carrier-capable nations, including Canada and Australia. Tables include full lists of operating units for key aircraft, such as the F-14 Tomcat and Sea Harrier, and each chapter is preceded by details of carrier development, nation-by-nation, with specifications for key carrier designs, carrier profiles where appropriate, as well as tables of typical air wing components through the years, and details of combat operations. About the AuthorThomas Newdick, an aviation and defence writer and editor, has researched and written numerous articles for various specialist magazines and journals examining military and civil aviation, twentieth-century military history and defence technology. He has contributed to books such as The Encyclopedia of Military Jets, and is a regular contributor to Combat Aircraft and Aircraft Illustrated magazines.