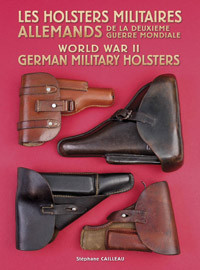 Germany has always been a big handgun designer. Therefore an amazing number of books have been dedicated to them in these last years. It is not the same for the holsters which have never got such a literary infatuation. The place and current status of this accessory- that could be considered as the most intimate friend of the handgun indeed- cannot be neglected. In this original work of more than 500 pages you will find information which has never been collected about this fascinating theme. Practically, a bit more than 200 holsters used by the German armed forces during World War II have been inspected. Each holster is set out in color, on both sides, with different markings and other characteristics which are brought to the fore. A bilingual comment (French and English) written up in seven points, gives all the information (materials, locking systems …) on the exhibited holster. In this book, you will find all the holsters designed for the German: 9mm pistols Parabellum, in addition to other 7,65mm and other 9mm, Steyr, 6,3mm, 7,63mm handguns. The collected holsters for the guns acquired among the allied countries of the Nazi Germany (Spain, Hungary and Italy) but also those coming from the numerous occupied countries : Belgium, France, Czechoslovakia) are also part of the same detailed studies. Some of these holsters are well-known from the amateurs whereas others are much less so and therefore can be seen as real rarities… Lots of pictures from that period, most of them are original, show how these holsters are actually used. The iconography is enriched by some extracts of marvelous illustrated catalogues, official documents and archives. The comments of all the pictures and illustrations are written in two languages (French and English). The presentation of the 200 holsters is preceded by a large introduction which covers the historical and technical aspects related to the way the holsters were actually made. Among others the different materials that were used (leather, ersatz, …) will be covered as well as the shape of the holsters (case, the type Anuschat and Theuermann). Likewise some comments will be devoted to the very enigmatic shoulder holsters as well as to the amazing alterations of holsters. The reproductions- that have been increasingly debated through time- will also be part of this book. This section will be enriched by illicit specimen. In this respect, some traps to avoid are presented with loads of comments and precisions. This part dedicated to the reproductions (in their broadest meaning) should allow to avoid some tragedies… The printed markings on the German holsters of that time are also the subject of a wide review. Those inscriptions are about the different parts of the German armed forces (Wehrmacht, Luftwaffe…) and are for the collector a major matter. Finally, a few pages are dedicated to the maintenance of the leather whereas a very last chapter gives all the details of the allocated codes of the holster makers. The purpose of the book is therefore to offer the amateur a very extensive yet non-exhaustive review of the huge production of the holsters designed for the guns used by the German armed forces during a period spanning from the interwar period until the final 1945 clash. The internet site www.germanholsters.be completely dedicated to this work, about the subject, to upload other photographs of that time and to discover new holsters. In the end, it is hoped that this website will also help identify holsters or difficult markings. 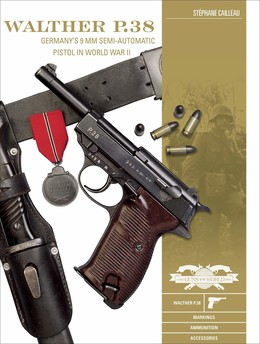