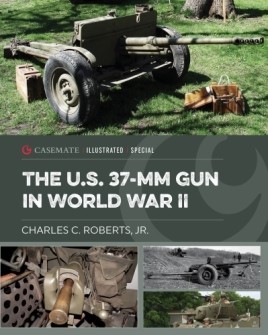 Fully illustrated reference work on the development of the 37-mm gun widely used by American forces in World War II.

Developed in response to the 1899 Hague Convention, the 37-mm gun met the restrictions on the size of weapons that could fire explosive shells, yet was also light and lethal enough to be used in battle. After World War I, in which the French Model 1916 37-mm was used extensively, several countries developed or adopted the 37-mm gun.

Behind in their development of an anti-tank gun, the United States relied on the German Pak 36 37-mm design as a basis for development. By the mid 1930s, the US Ordnance Department designed the M3 37-mm gun and M4 carriage resulting in a towed anti-tank gun, the first anti-tank gun in the U.S. Army. This gun proved effective at the beginning of World War II, but as German armour protection increased, it could not penetrate the frontal armuor of many German tanks and was relegated to lesser roles. However, the gun proved effective against the Japanese tanks and Japanese strong points in the Far East.

Fully illustrated, this is the first complete account of the development and use of the US 37-mm gun in World War II.