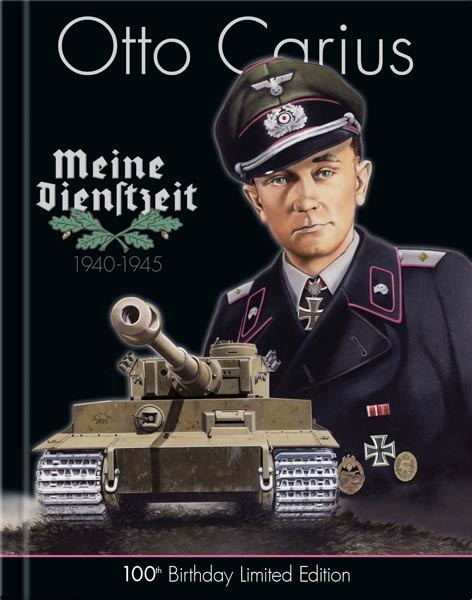 Uwe Feist was a personal friend of Herr Otto Carius and presented the first edition of his book to Carius for his 90th birthday in 2012. Mr Feist published this second edition as a memorial to Herr Carius and to honour what would have been his one-hundredth birthday.

This edition of ‘Meine Dienstzeit’ features new photos and updates.

Meine Dienstzeit translates as “My Military Service”, and focuses on the experiences of Otto Carius, the famous German Tiger I commander of WWII. Photos and stories chronicle his entrance into the Wehrmacht as a volunteer, his life as a soldier, and his victories as a Panzer commander for three and a half years on the Eastern Front. The book is filled with detailed photos and illustrations of his numerous medals, decorations and documents and includes a transcript of an interview with Otto Carius about his time in the military. The book also contains excerpts from his book “Tiger im Schlamm” (first edition printed 1960) with corresponding photos.

In October 1944, Otto Carius became the youngest Reserve Officer in the Wehrmacht to receive the Oak Leaves (issue Nr.535). A total of 882 Oak leaves were awarded by 9 May 1945.