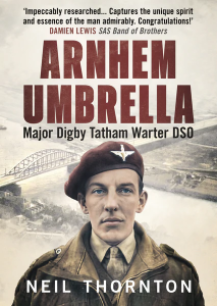 Operation Market Garden was Major Digby Tatham Warter’s first military action. As the officer commanding (OC) of ‘A’ Company, 2 Para, Digby brushed aside German resistance and succeeded in leading his men to the Arnhem road bridge in Holland.

Over the course of the next four days, Digby, a well-known eccentric, enhanced his reputation further by displaying solid leadership and a fearlessness, which left everyone who witnessed it in awe.

Picking up an umbrella and bowler hat from one of the houses, Tatham Warter strolled around the perimeter oblivious to shot and shell, instilling confidence in his men and inspiring them to battle on in the face of overwhelming odds. Wounded and captured at the battle’s end, Digby escaped, linked up with the Dutch Resistance and in the weeks that followed, strutted round the area disguised as a deaf and dumb Dutchman in order to fool the Germans.

Collecting over 100 paratroopers (‘evaders’), Digby forged a plan to lead them through enemy lines to safety. Digby’s post-war years are just as exciting. This is his story.