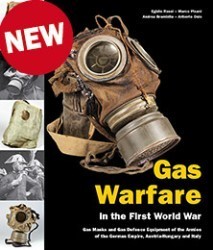 Anti-Gas Protection and Gas Masks in the Armies of the German Empire, Austria-Hungary and Italy.

Defeating the enemy by any means has always been a goal of warring parties. This was also true during the First World War, when no stone was left unturned to eliminate the enemy, even by using aggressive chemicals or poisonous substances, which science readily provided. For this reason, it soon became necessary to provide one’s own soldiers with special equipment to protect them against this invisible enemy.

In recent years the study of the gas-defence equipment supplied to the warring armies has seen growing interest. This book, comprehensively illustrated with photographs of more than 200 original specimens preserved in private collections or museums, seeks to describe and illustrate the most important gas-defence equipment used during the First World War by the imperial armies of Germany and Austria-Hungary and by the army of the Kingdom of Italy.

This publication describes the development of these devices over time, from the first respirators borrowed from the sanitary sector to sophisticated protective masks with filters and their corresponding containers, and special clothing for protection against blister-forming gases. Numerous official documents from the war years are accompanied by a number of important original photographs from the period that testify to the extensive use of gas-defence equipment in the trenches of the First World War.

The book also contains an historical overview of research in the field of poison gases by the three nations, information about the industries that took part in their production, and a chapter dedicated to the most important types of poison gas. 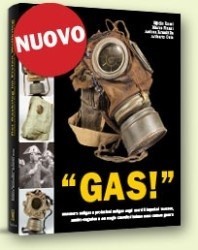