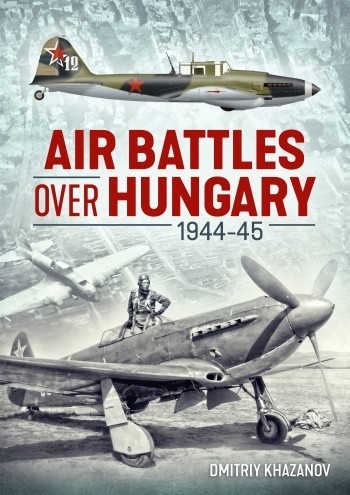 This work is dedicated for the most part to the fighting over Hungary during the course of the Debrecen (6 October – 27 October 1944) and Budapest (29 October 1944 – 13 February 1945) offensives, as well as the Balaton Defensive Operation (6 – 15 March 1945), which the Red Army carried out from autumn 1944 until the spring of 1945. The conduct of these operations preceded an attempt by the Regent of Budapest, Miklos Horthy, to pull his country out of the war. This attempt however was unsuccessful – Vice Admiral Horthy was replaced under Hitler's orders by the pro-Hitlerite henchman Szalasi, after which fierce and desperate battles broke out both on the ground and in the air. Moreover the Wehrmacht were constantly augmenting their forces, first and foremost their panzers.

These battles took place with the Red Army Air Force enjoying numerical superiority, the quality of Soviet aircraft at the end of the war had improved significantly, and even the level of training for air force personnel had been raised. It seemed that there were almost no air aces left in the ranks of the Luftwaffe by the end of the war, and Soviet airmen would have no problem securing a victory, however this was not the case. Erich Hartmann, Hans-Ulrich Rudel, Gerhard Barkhorn, and many others fought here. Amongst the Hungarians their highest scoring ace Dezso Szentgyorgyi stood out, as did their outstanding Commander Aladar de Heppes. Their enemies were Kirill Yevstigneyev, Grigoriy Sivkov, Aleksandr Koldunov, Nikolai Skomorokhov, and Georgiy Beregovoy and their comrades.

The very fact that from time to time they took place directly over Budapest – one of the most beautiful cities in Europe, could be considered a distinguishing feature of these battles. This made the city into a battlefield, it was bristling with anti-aircraft artillery, was frequently subjected to bombing raids, and between the end of December – and the beginning of January many areas in the Hungarian capital had been turned into improvised airfields, and landing strips where transport aircraft and gliders would land with either German or Hungarian markings. Despite all the efforts to set up an «air bridge» German command never succeeded in achieving this, which forced those who found themselves besieged in the city to attempt a breakthrough, after which those remaining in the garrison surrendered. The long drawn out battle near Lake Balaton ended in defeat for the German forces, and their allies.