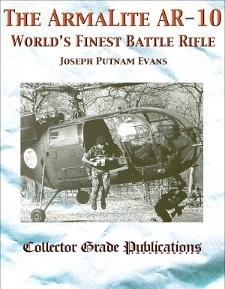 This is the most complete account of the history of the invention, development, manufacture, and use of the ArmaLite AR-10 rifle ever to appear in print. The road to the U.S.-built AR-10 is followed faithfully and meticulously, with descriptions and numerous illustrations of all the 'AR'-numbered designs—such as the "Para- Sniper", a lightweight, .308-caliber bolt-action spoiler fitted with a composite aluminum/stainless steel barrel and foam-filled fiberglass stock (the AR-1); a prospective survival rifle for the U.S. Air Force (the AR-5), and its civilian offshoot, the popular AR-7—through the series of one-off experimental prototypes that led to the 7.62mm NATO caliber ArmaLite AR-10B, a remarkable rifle in many ways. Five hand-produced examples of the AR-10B created a sensation in a number of successful military demonstrations, until coming face to face with the "NIH" factor (Not Invented Here) as espoused by Springfield Armory, where the AR-10 was subjected to a series of nefariously rigged trials before being dismissed as "Not Satisfactory as a Military Service Rifle". Further improvements and a new lease on life for the AR-10 in series production at the state-owned arsenal Artillerie-Inrichtingen in The Netherlands followed, with the potential world market carved into sales territories for the several arms merchants eager and willing to promote it. The book describes and illustrates all the different "country" and other military models of the AR-10 "family", which included scoped AR-10 sniper rifles and magazine- and belt-fed light machine guns, as well as the experimental carbine and sporting (semi¬auto-only) versions produced in Holland before program termination. Uniquely, this book continues with extensive, illustrated coverage of the successful use of the perfected NATO model of the AR-10 in combat, largely with Portuguese forces, under some of the harshest and most grueling conditions on the planet. In every instance the AR-10 acquitted itself with high honors, earning praise and devotion from its users. As far as is known, such a wealth of tactical and historical information on the combat use of the AR-10 has never appeared before in any source - certainly Small Arms of the World and other respected compendia contain little or no information whatsoever concerning this crucial segment of the AR-10 story. The modern-day rebirth of the 7.62mm AR-10 in several guises; the fate of surplus returns; and a look at the latter-day designs of ArmaLite Incorporated, are followed by a Bibliography and an extensive Index. 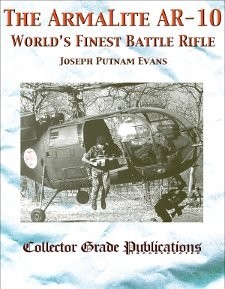