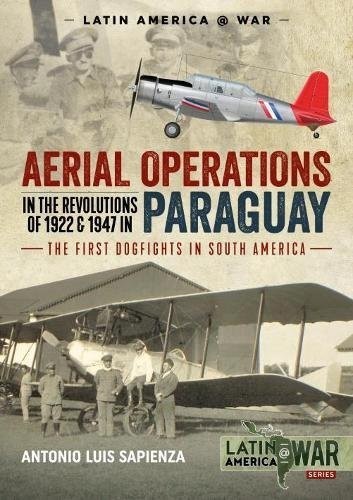 The First Dogfights in South America

In the first half of the XX Century, there were several revolutions in Paraguay, starting in 1904, then 1908, 1911-12, 1922-23, 1936 and finally 1947. In 1922, a huge internal crisis in the Liberal Party led to a bloody revolution and for the first time in the history of the country, both sides decided to use aerial power against the enemy. There were not any airplanes available in Paraguay at that time, and very few pilots, just three, so both, the government led by President Eusebio Ayala, and the revolutionaries led by a couple of Army Colonels, Chirife and Mendoza, searched for foreign pilots and planes in Buenos Aires, Argentina. Many WWI veterans immigrated to Latin America in search of a better life, either opening flight schools or offering their services in local conflicts. And that is how some of them came to Paraguay with their own aircraft, which were bought by either the government or the revolutionaries. The three Paraguayan pilots offered their services to the government which soon established the first Air Base near the capital, in a wide open field called “Ñu-Guazú” (a Guaraní name meaning “Big Field”). Meanwhile, the rebels organized their own air base, first near the city of Villarrica, and later in Cangó. The main types used by both sides were the Ansaldo SVA5 and SVA10, but the government could also purchase a Breguet XIV, an Armstrong Whitworth FK.8, a SPAD S.20 and a couple of SAML A.3. Inevitably soon the first dogfights took place, and also bombing raids, strafing enemy troops, and recce missions on both sides. Finally, in mid-1923, the revolutionaries were defeated and one of the consequences was the foundation of the Military Aviation School.

On the other hand, the Revolution of 1947 lasted just a few months but it was as bloody as the previous one, if not more so. The government, supported by the Colorado Party, fought against the revolutionaries composed by almost 70% of the Army, Navy and Air Arm, supported by the Liberal, Febrerista and Communist parties. Regarding the Air Arm, it split in two, but at the beginning, most of the aircraft in flying conditions were used by the revolutionaries, whose main base was the city of Concepción, in the north of the country. Soon, the government air arm had some aircraft in flying conditions although most of the Italian types purchased in 1939 were out of service. Only Lend-Lease trainers such as PT-19, BT-13, AT-6 were used for recce and light bombing raids, using mortar ammunition. Some weeks later, the loyalists could repair some Caproni AP-1s to be flown against the rebels. There were a few dogfights but no aircraft were shot down in them, although some were due to AA fire. In the end, the government could defeat the revolutionaries, mainly because the lack of tactical organization in the rebel forces.

This is the first in-depth account of them with data, pictures, maps and profiles, some of them never published before.