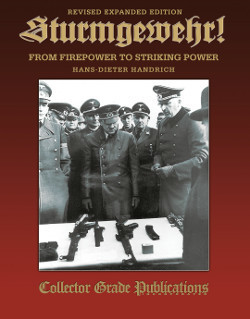 From Firepower to Striking Power - REVISED AND EXPANDED 2017 EDITION

The first edition of this classic work appeared in 2004, and has long been out of print. The author, a prizewinning military historian, has continued his research in the military archives of Germany and elsewhere and we now present this expanded, revised edition, which contains the most complete and authoritative account ever published of the intermediate calibre assault rifle and the revolutionary 7.92x33mm kurz cartridge.

It has been said that Adolf Hitler was the greatest general the Allies had during WWII, and several examples of his fatefully bungled tactical decisions are discussed. None was perhaps more significant than his refusal on three separate occasions to sanction the development and adoption of the intermediate calibre assault rifle as the general issue weapon of the Wehrmacht. Its acceptance and fielding proved to be a long, tortuous and never fully completed process and, as a measure of the complexity of the story, in all of German small arms history, no weapon was renamed so often within such a short period of time.

The Sturmgewehr 44 (assault rifle 44) to give it its ultimate name, was belatedly approved by Hitler in October, 1944, after his earlier rejections had delayed the programme for a full year, and by the time he changed his mind a general rearming was out of the question. Nevertheless, the Sturmgewehr was by far the most important and influential small arm and cartridge development of the war. Fully indexed