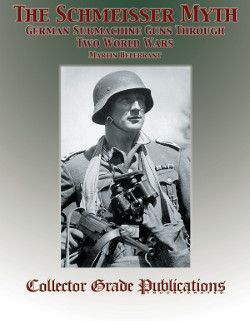 Of the plethora of submachine guns developed in Germany before 1945, most if not all of which are covered in this book, the most popular by far have been the M.P. 38 and MP 40 series, collectively but erroneously known to all and sundry as “Schmeissers.”

The origins of “the Schmeisser myth” can be traced back to the summer of 1940, when an official British Military Intelligence report described the first captured M.P. 38 as a “Parachute troops machine pistol of the Schmeisser type”, while later that year plans were afoot to produce the “9mm Schmeisser Carbine M.P. 38 Parachute Model” at BSA Guns Ltd. in Birmingham.

The book begins with a brief history of modern warfare and the technological and strategical developments which led to the first “machine guns”, and the adoption during WWI of Infiltration tactics as a means of surmounting the stagnation of trench warfare. The élite German and Austrian Sturmtruppen (storm troopers) were soon clamouring for portable rapid-fire weaponry capable of effective close-range striking power, and a new class of military small arm was the result, beginning with the Italian Villar Perosa. Several early German developments culminated in the adoption of the Bergmann M.P. 18,I in 1918. The new term “submachine gun”, coined in America, soon came to denote any light, portable pistol-calibre automatic weapon of the type called a Maschinenpistole in Germany.

Of special interest to advanced collectors will be the four detailed, illustrated accounts of M.P. 38 and MP 40 magazines and loaders, magazine pouches, manuals, and the rare transport and storage chest.

This in-depth technical, tactical and historical treatise on these important and iconic weapons and their makers concludes with a Bibliography and an extensive Index.